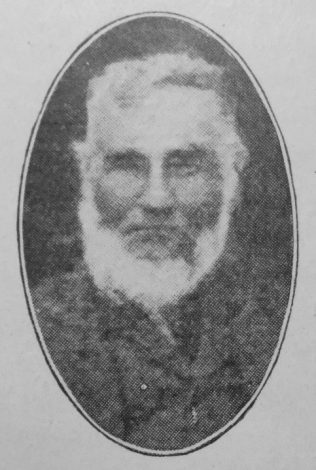 Transcription of obituary published in the Primitive Methodist Magazine by M.P.

Mr. Isaac Bainbridge was born July 24th, 1821, in the Stanhope Circuit, Weardale, and died at Ingleby, June 3rd, 1908. At the age of twenty-one he experienced a spiritual awakening and became a member of our church. A year later he was admitted to the plan and until about five years ago regularly took appointments. Over fifty years ago he opened his home for a Sunday School, and up to his death was deeply interested in Sunday School work. At his death he was a class leader, and had been for over fifty-three years. He has been a trustee for more than one Primitive Methodist Church, and he occupied the post of circuit steward for twenty years in the Stokesby Circuit. He attended many District Meetings in the old Sunderland District, and twice was delegate to Conference.

In 1863 he moved to Ingleby Greenhow, in the Stokesby Circuit. For two years services had been held occasionally in the house he came to occupy. These he made regular and secured for Greenhow a place on the plan. Services continue to be held in Westwood farm kitchen, and Greenhow is one of the finest societies in the circuit.

To know Mr. Bainbridge was to admire and honour him. There was no section of the life of our church that had not his deep interest and loyal support, and every branch of the Christian church could count upon his sympathy and help.

His funeral took place on July 6th, at Ingleby, and was attended by a large number of relatives and friends. The service in the parish church was conducted by the rector of the parish; the Rev. Mark Pattison, circuit minister, interred, closing the service with a brief address.

Mrs. Bainbridge is still with us. The sons, Messrs. Burton, James, and Crosby Bainbridge, are well known to the district as loyal and honourable Primitive Methodist and Christian gentlemen. The five daughters are all worthy Christians and do credit to the splendid Christian home and church in which they have been reared.

Isaac was baptised on 26 August 1821 at Stanhope, Weardale, Co. Durham. His parents were Thomas, a farmer, and Jane.