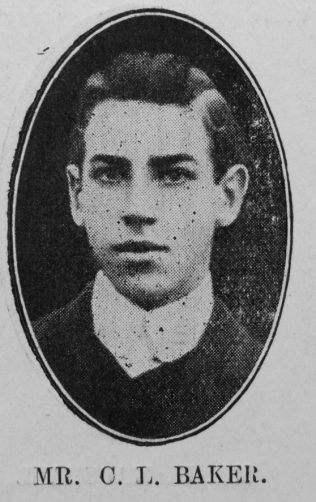 Transcription of Obituary published in the Primitive Methodist Magazine by G.B. Gleghorn

Charles Leonard Baker was born in Nottingham, November 8th, 1889, and died just before he attained his nineteenth year. He was only eight years of age when his parents came to Peterborough. Dedicated by his parents for the service of the Master at the “very mouth of the way” he gave much promise of usefulness in the cause of God.

His mother exercised a great influence over him, and a beautiful tenderness existed between them. She said just before she passed away, “I could leave all but Len, all but Len.”

When mother was gone, and he had to lean more upon father and sisters, he still acted as a worthy son and brother.

Though so young he was always ready to render service to the church of his youthful days, whatever gifts he possessed he placed them at its disposal.

In seeking to carry out the purpose of his life as a schoolmaster, he tried to enter one of the colleges, but there being no vacancy at the time, he elected to take the position of assistant master at Poole in Dorsetshire, and for two months worked assiduously, and won excellent opinions from all the authorities.

He entered at once upon the work of the church there, and one of the tasks he left unfinished was the coaching of some young scholars for a scripture examination. And while thus fully occupied both on week days and Sundays he was stricken down and his career of usefulness suddenly brought to a close. A complication of diseases seemed to conspire to bring this about, and heart failure completing the work, in a comparatively few days our young friend had gone, carried by the angels to the home above.

He said but little while he lay, was grateful for all kindness shown, when questioned as to his eternal salvation, he replied, “Settled long ago and Christ is precious.”

The Principal of the school both at Peterborough and Poole unite in their testimony to the excellency of his character and the hopefulness of a successful career, but he is graduating in a higher clime.

Charles was born on 18 November 1889 at Nottingham, Nottinghamshire, to parents Joseph W. Baker, a railway engine driver (1891), and Emma Tyler.