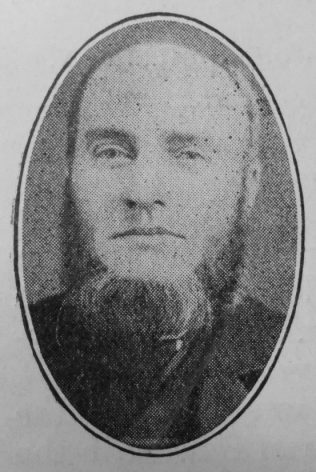 David Baldwin was born at Bloxwich in 1843. Taken to our Sunday School by his father (who was its superintendent), as early as he was able to attend, his training there and at home laid the foundation of that beautiful Christian character he so fully exemplified in later life. While these foundations were being laid the Rev. W. (now General) Booth visited Walsall. David, who was then fourteen years of age, was one of his hearers. On that occasion he came to a decision for Christ. He at once began to work in the Sunday School, where he rose in service and honours till he became superintendent.

He was also a class leader, for which work he had special aptitude. He led his class on the Thursday night before the Saturday on which he died. He was an excellent home-visitor.

Many in Bloxwich will long remember his genial presence in their homes. In early life he determined to keep a conscience void of offence. He would not knowingly be a party to any transaction that wronged God or man. This sometimes caused him to walk in the shadow.

But he had always inward sunshine, as his countenance testified. A lover of his Bible, it was his custom to gather his family around him in the evening for Bible reading, exposition, and prayer. He was, during fifty years, a regular attendant at the seven o’clock Sunday morning prayer meeting. He also loved secret prayer, and spent much time alone with God. In his early life he took part in open-air evangelism; co-operating with such veterans as Revs. Porter, Huff, Devonport, Turner and Richards.

To most of us his end seemed sudden; but he had intimated to several friends that he thought he was nearing the ford of the river.

On Saturday morning, March 21st, he had only just crossed his threshold, when he suddenly fell. He was lifted to his bed, where he resigned his blood-washed soul into the hands of his Saviour.

David was born in the spring of 1843 at Bloxwich, Staffordshire, to parents William Baldwin, a farm labourer and Wesleyan Sunday School superintendent (1851), and Ann Boulton.

He married Mary Darrall (abt1844-1912) in the summer of 1865 at Bloxwich, Staffordshire. Census returns identify four children.