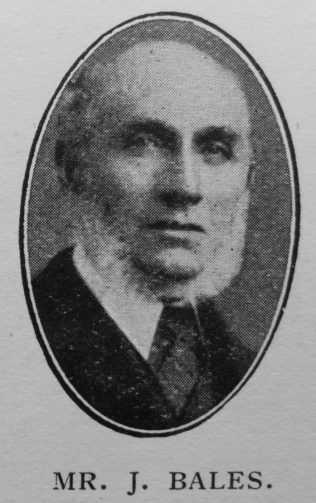 Jacob Bales was born at Alston in 1828, and died at Tyne Dock, Dec. 28th, 1910, at the age of eighty-two years. A typical dalesman, he was deservedly esteemed and respected as a man of sterling, upright character. Amongst his workmates his counsel was often sought, and his word went a long way. Up to the end of his days, Bro. Bales would tell with joy the story of his conversion in 1865. He came to Tyne Dock in 1869, and joined the Lord Nelson Street Church. He was an example of consistent piety and conduct, a diligent attender at the Class meetings, prayer meetings, and the means of grace. He never occupied a prominent part in the public service of the Church, but he was a living epistle, “known and read of all men.”

In his own home, night after night the family was gathered together for the reading of the Scriptures and prayer. Daily, by his conversation and conduct, he manifested a genuine, but unassuming spiritual character. He dearly loved the Church below, and now experiences the joy of the Church above.

Note: I have not been able to identify a marriage record for Jacob. Family trees on ancestry.com record that the marriage took place at Gretna Green.