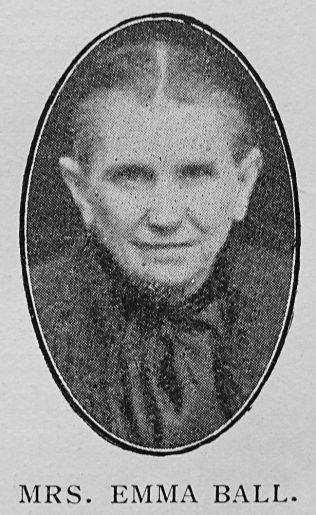 The Curzon Street Church, Leicester Third Circuit, lost an old and faithful member on October 18th, 1910, in the person of Mrs. Emma Ball, who passed away suddenly through an apoplectic seizure. Our sister was originally a Baptist, and rendered useful service as a Sunday School Teacher and chorister in the Belvoir Street Church, Leicester. She was also a zealous total abstainer and temperance worker; and in youth, at the cost of some persecution, supported the work of the famous “Dicky Horn.”

After her marriage to Mr. William Ball, who, though in frail health, survives her, she, with him, joined our George Street Church. Some thirty years ago our friends became connected with Curzon Street, where their loyalty and consistency have made them highly esteemed. While health and strength permitted, Mrs. Ball was a regular attendant and an earnest worker. She also did much good in sick nursing. Hence, she became locally known as “Nurse Ball.”

Infirmities kept her from the services in her latest years, but her interest in the Church, and in all that was good, remained unabated. At the close of her life she was spared a lingering illness. A few hours of unconsciousness, and she fell asleep in Jesus. The funeral was conducted by the Rev. N. Jefferson, an old ministerial friend of the family; and appreciative reference to the departed was made by the writer.

And so a life of beautiful ministry came to a close. It is not in great gifts that is to be found the assurance of the Master’s “well done,” but in the faithful use of such gifts as have been entrusted to us. “Nurse Ball” served her fellows with faithfulness and devotion along the line of her endowment. Causes that make for the advancement of the Kingdom of God could count on her enthusiastic support.

Emma was born abt1844 at Leicester, Leicestershire, to parents Thomas Freeman and Mary Moore.

Note: “Dicky Horn” was an eccentric preacher and temperance lecturer.