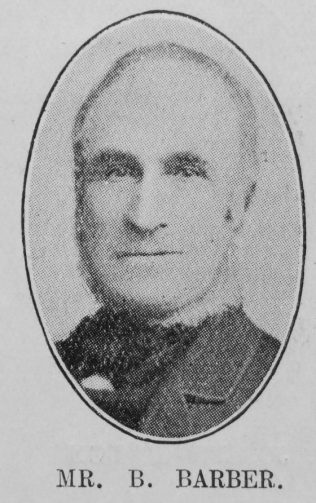 Benjamin Barber was born on May 29th, 1824, at Beeston, Norfolk, and was converted at Castle Acre, Swaffham Circuit, in 1845. Most of his time was spent on the Downham Market Circuit, where he was superintendent of some of the Sunday Schools, was society steward, and used to start the hymns in the services. His occupation was wheelwright and carpenter.. His wife, Elizabeth, who died three years ago, was a great helper with him in all branches of the work of the church which they loved so well. In 1906 he came to reside at Eastbourne with his daughter, Nellie, the wife of Inspector W.F. Blake, N.S.P.C.C.,son of the late Rev. Ephraim Blake. Two daughters, one son, and a daughter-in-law, cherish in their hearts the memory of a good father.

He was glad to receive the Old Age Pension, and knew something of the joy it would bring into old hearts less comfortable in circumstances than himself.

Often he talked of the good old times, and rejoiced to have lived to see his beloved church a great power in the land; he was always glad to hear of any good being done.

His passing was so peaceful that one was glad to see how a life so pure and strong can at last enter the great Homeland, as if borne, while asleep, by angel arms to the heart of the Eternal Father. “And so He giveth His beloved in sleep.” Words of beautiful significance! For those who wake again in this life new strength or guidance or comfort will have been received, while if the waking is in the spirit world an abundant entrance will be administered into the everlasting kingdom of our Lord and Saviour Jesus Christ.

Thus he departed on Sunday, January 24th, and was interred at Ocklynge Cemetery, Eastbourne, on Wednesday, January 27th.

The funeral service was conducted by the Rev. J. Clennell who, on Sunday, February 7th, preached his funeral sermon.

Benjamin worked as a wheelwright.