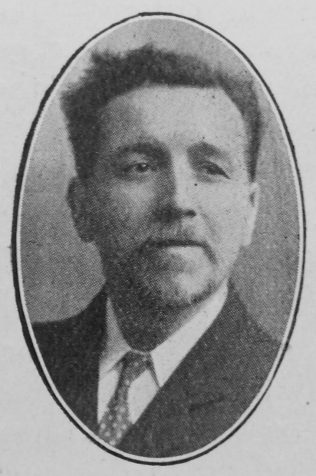 Transcription of obituary published in the Primitive Methodist Magazine by S.A Barron

There was general sorrow in the circuit and town of Loughborough, when it became known that George Barker had passed away. He was one of those elect spirits, noble, tender, reverent, true, whom to know is to admire and love; and to have influenced and trained whom is the real success of any church. Born in 1860, he was but in the prime of life, when on September 19th, 1907, he was called to the higher service. The son of an esteemed local preacher, he was brought up under religious influences. The circuit ministers were constant visitors to his home, and he was accustomed to speak with especial veneration of the saintly Thomas Baron, whose fatherly counsel had much to do with his early decision for Christ.

His intellectual strength was above the average, and his conversational powers were exceptional. In the Swan Street School, which he entered as a scholar at the age of seven, he occupied successively the offices: of teacher, secretary, assistant superintendent, and superintendent. He brought to this work rare ability and devotion, and unwearied patience and zeal. During his last illness, he was greatly cheered by many grateful messages from old scholars, telling how they owed to him the beginning of their spiritual life. To his old friend and Sunday School colleague, Mr. A. Faulks, he said, “If I could live my life again I would give it to the young people”; and to the Rev. G. Chun, he said, “I would like to be remembered as ‘the children’s friend.“

He filled, efficiently and faithfully, the offices of class leader, assistant Society steward, and president of the Christian Endeavour. For twenty years he acted as secretary to the trust. His excellent judgment and loving care for the House of God made him an invaluable official, while his loyalty and abounding kindness made him a true ministers’ friend. He was musical; a student of hymns and tunes; and his influence upon the service of praise, especially in the Sunday School, was much appreciated.

Above all things, Mr. Barker was a devoted Christian man. His piety was deep and real; and his spirituality manifest. When the shadow of death fell upon him, there was no murmuring, but a patient endurance of pain, and an absolute trust in God. All of us who were permitted to commune with his brave and beautiful spirit, as he waited for the end, and to hear his words of resignation and hope and triumphant confidence —his avowal of “complete and even cheerful submission” to the will of God—feel it to have been a privilege we shall never forget. The whole town seemed to mourn at his funeral. Although he had been an earnest temperance worker from his youth, even the public houses closed their doors and shut down their blinds. He was interred on September 23rd, and a memorial service was conducted in the Swan Street Chapel on the following Sunday by his former minister, and endeared friend, the Rev. J.T. Ecob, a memorial address being also given in the school by Mr. A. Faulks. Our friend has left a widow and son and daughter —all members of the church —who deeply mourn his departure.

All who knew him feel life to be the poorer for his passing, but we await the morning, when we shall meet again.

George was born in late 1859 at Loughborough, Leicestershire, to parents George Cresswell Barker, a basket maker, and Sarah Ann Underwood.

He married Mary Bradwell (1854-1920) in the summer of 1883 at Loughborough. Census returns identify two of four children.

George died on 19 September 1907 at Loughborough.