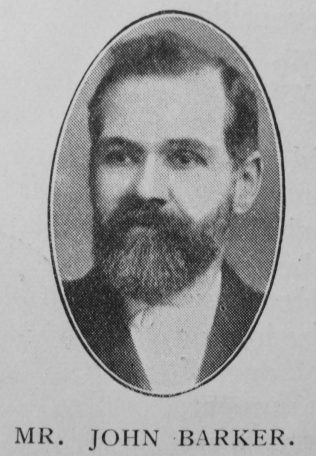 Transcription of obituary published in the Primitive Methodist Magazine by R.W.

Brother John Barker was only 53 years of age, and had always been of a healthy and robust constitution. His death, on November 4th, was the result of a blow, which caused a tumour to form. He was taken to the Durham Hospital, but he was incurable, and returned home. His funeral took place in the Brandon Cemetery, November 8th, and was attended by a large number of friends. Rev. R. Walton, assisted by Mr. W. Ward, officiated. He leaves a widow, four daughters, and three sons.

Our brother was a man of sterling character, and very highly respected. Converted at eighteen years of age, he soon began to prepare for the plan, and for thirty-three years was a local preacher. Several times he conducted evangelistic services for weeks together, and some twenty years ago, at the request of the Spennymoor Circuit, he took ministerial work for six months during the illness of Rev. W. Shipley.

Strong physically, intellectually, morally, he was kind, tender-hearted, and helpful. Nothing pleased him so much as to hear that people were getting converted. He loved to preach, and took a deep interest in the Sabbath School. He was also a class leader and secretary to the trustees. His death is a great loss.

John was born abt1857 at Hetton le Hole, Co. Durham, to parents James, a coal miner, and Sarah Jane.