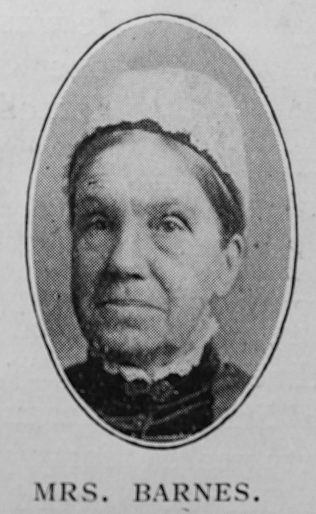 Transcription of obituary published in the Primitive Methodist Magazine by R. Heppenstall

The Bristol churches, and particularly Ebenezer, have lost in the death of Mrs. Barnes a saint, who, for nearly fifty years, wielded an influence far beyond the confines of the city. Born at Westbury, in Wilts, on February 21st, 1828, her parents removing to Bristol, she in 1849 made a full surrender to God. She began at once to teach in the Sunday School.

On her marriage to Mr. Wm. Barnes, a local preacher, they laboured together for the conversion of souls. After his death she became a district visitor, and for this work she had special qualifications. She was also a leader of the senior Bible class at Ebenezer, and society class leader. An untiring worker for bazaars and charitable institutions, our Connexional missions were helped by her gifts.

As a mother she came near to the ideal. The home life was filled with a gracious, Christian spirit; her children were trained in unselfishness and active Church work. Our sister’s life had its sorrows, deep and poignant, but they were sanctified. Her Christian faith taught her patience, trust and calmness in the midst of life’s turmoil and storms.

On April 1st, 1913, this beautiful spirit “ascended to the higher life.” The funeral service in Ebenezer Church was led by Revs. J. Wilkinson and W. Cheetham.

Henrietta was born on 21 February 1828 at Westbury, Wiltshire, to mother Sarah.

She married William Barnes (1812-1874), a railway clerk (1861), in the summer of 1848 in the Clifton Registration District, Gloucestershire. Census returns and birth records identify nine children.