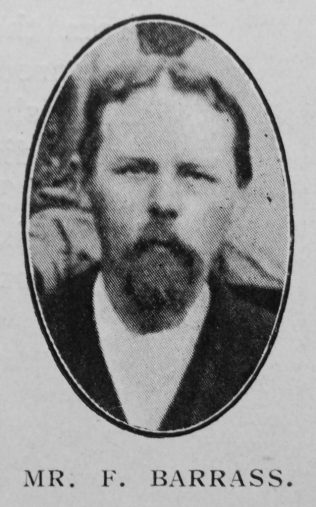 A great loss has come to North Seaton Church in the Ashington Circuit by the death of Bro. Francis Barrass on July 8th after a lingering illness. Son of the late James Barrass, famous for years as a powerful local preacher, Brother Barrass was born at West Cramlington in 1855, and moved to North Seaton thirty-seven years ago. From that time until illness prevented he worked in the mine. Converted at North Seaton, his membership had extended over thirty years.

As class leader and trustee he rendered diligent service. A loyal Primitive Methodist, our brother was interested in the welfare of the whole Connexion and intensely devoted to his own society. He laboured for the community in other ways, but the Church was always first with him. He walked in the light and now rejoices in the glory of the unveiled Presence.

Prior to the interment in Seaton Hirst churchyard a service was conducted in our North Seaton Church by Revs. W. Pickering, J.F. Loveday and Mr. W.H. Hughes. The sympathies of all were with the widow and family, who mourn him.

Francis was born in late 1854 at West Cramlington, Northumberland, to parents James Absalom Barrass, a coal miner (1861), and Elizabeth Morgan.

He married Ann Jane Swan (1857-1920) in the summer of 1883 in the Morpeth Registration District, Northumberland. Census returns and cemetery records identify two children.