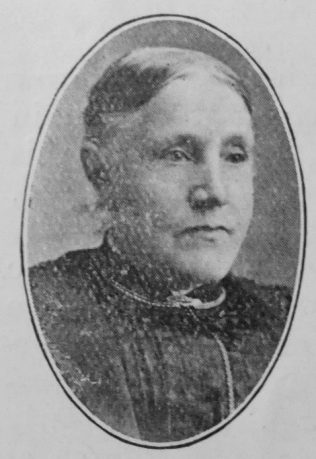 Transcription of obituary published in the Primitive Methodist Magazine by W. Spivey

Christian Barrett, wife of Rev. Wilson Barrett, was born at Helmshore, May 5th, 1841, and fell asleep in Jesus, June 17th, 1908, in her sixty-eighth year. She attended our Sunday School until, when the family removed to Clayton-le-Moor, where we had no cause, she was sent to the Wesleyan school, where as teacher and member of the church she remained until her marriage with Mr. Barrett in 1866. Despite losing her mother in her tenth year, and possessing meagre educational advantages, our sister became an intelligent Christian woman with a strong grip of the essentials of the Christian religion. Unassuming in manner she had a horror of shams and all conduct that was shady. In her home life she was frugal and industrious. From old colleagues Mr. Wilson has received many testimonies of the kindnesses they have received from her.

Rev. R. Heppenstall says: “One could talk to her so freely; she seemed intuitively to know how one felt. She possessed a combination of qualities which made her friendship very precious. It was an excellent training in sincerity to be much with her.”

In her religious activities she was industrious and persistent. During her forty-two years of married life there has been little cessation of bazaars and sales of work, and in these she always co-operated heartily and liberally with her husband. Her end was tragically sudden. Retiring to rest on June 11th in her usual health she awoke at 4.30 a.m. with great pain in her head. This rendered her unconscious until, in spite of all that medical care and tender nursing could do, she passed away early on Wednesday morning. The interment took place June 15th, in the Chesterfield Cemetery. A largely attended service was conducted previously in Mount Zion Church, in which Revs. W.J. Fryer, J. Keighley, H. Jones, M. Dobinson, W.A. Bryant, and W. Spivey, took part. On the following evening the writer conducted a memorial service in Mount Zion Church, basing his remarks on Rev. xiv. 13.

May the God of all grace richly sustain the bereaved family.

Christian was baptised on 31 October 1841 at Haslingden, Lancashire. Her parents were James, a spinner in cotton mill, and Matilda.

Christian worked as a weaver in a cotton mill prior to her marriage.