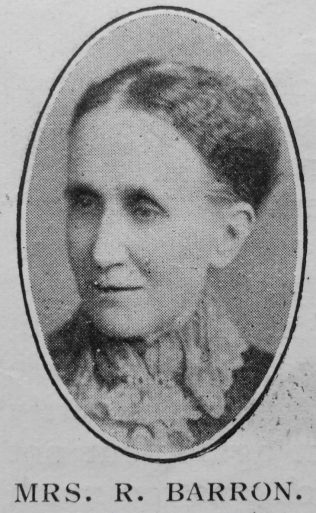 Mrs. Ruth Barron, widow of the late Rev. Reuben Barron, died, after a brief but severe illness, on Thursday, November 4th, 1909. Her early religious associations were Methodist, and her first connection with the Church coincided with the official conflicts that led in 1849 to the formation of the Methodist Free Church.

Through her first marriage she was related to the Rev. Edward Abbott, a prominent Free Methodist minister and Christian Endeavour leader. Becoming united in marriage to the Rev. R. Barron in 1876, she entered with great zest and heartiness into the work of the various churches of which he subsequently had charge; rendering much service in the organising of bazaars and other forms of financial effort. Her social gifts, affability and kindness, won for her many friends.

Left a widow in 1901, she settled at Claremont Street, Leicester; and later at Darlington. Towards the close of her life, she was afflicted with failure of sight; and this, to her great regret, largely withdrew her from the public services in which she had found comfort and pleasure. Her interest in the Church’s welfare remained undiminished to the close of life. She had known through her long life not a little of change and sorrow, but she is now at rest.

Ruth was born abt1835 at Codnor, Derbyshire, to parents William Smedley and Sarah Cater. She was baptised on 30 June 1837 at St Lawrence, Heanor, Derbyshire.