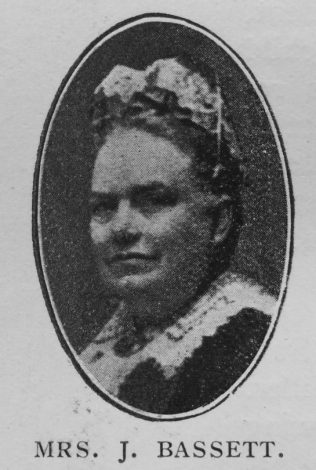 Transcription of obituary published in the Primitive Methodist Magazine by T.J.M.

Primitive Methodism in Burton sustained serious loss when Mrs. J. Bassett passed to her reward on Feb. 25th, after years of suffering patiently borne. Converted when eleven years old, she came to reside in Burton  thirty-two years ago, and gave ungrudging service of every kind for the furthering of God’s work. A faithful and devoted member, she prized in no ordinary way the means of grace, especially the class-meeting. One of a band of women who worked and sacrificed to reduce the heavy debt on Queen Street, its present position is in large measure due to her and her associates.

Her home life was exemplary, and it was her delight to entertain the ministers of her Church. Kindly sympathy, generous assistance and loving counsel were always given by her in cases of difficulty. She was sixty-six years old. On Feb. 29th all that was mortal of her was interred at the cemetery.