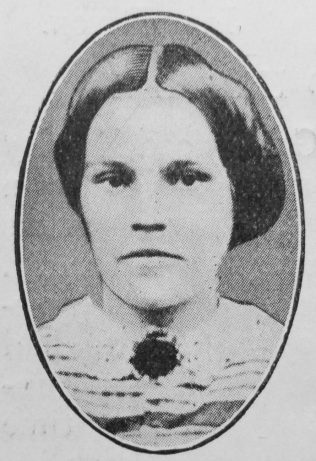 Transcription of obituary published in the Primitive Methodist Magazine by Geo. Preece

Mary Ann Bate was the daughter of Timothy Millichamp, a Primitive Methodist Local Preacher. She was born in the year 1835, in the neighbourhood of Clee Hill, Salop.

The exact date of our sister’s conversion is not known, but the oldest Class Ticket to be found bears the date 1864, at which time she was a member of the society at Cleeton, which held its meetings in a cottage.

In the year 1866 she married Jonathan Bate, a local preacher, and they subsequently went to live at Bedlam near Bitterley, and for some years services were held in their house.

Those who knew our sister speak of her in the highest terms. She always had the manner of a sanctified woman; her conversation was invariably edifying. She stood for purity of worship and always objected strongly to any innovation which had the appearance of worldliness. Her duties often prevented her from attending the means of grace, and in later years this was especially so, distance, deafness, and failing health being the chief causes. She however regularly paid her quarterage, and generously supported the funds of the Church, and Missionary collectors were rarely turned away. She was amongst those who in obscure places serve God and their generation in a quiet way: too retiring to secure public appreciation, or the applause of the crowd, but living in anticipation of God’s “Well done.”

About two years ago she had a serious illness from which she did not fully recover. The end came suddenly. She died in the early hours of Thursday, November 21st, 1907. She was buried in the churchyard at Bitterley on the following Monday.

A husband and four children are left to mourn their loss. The writer conducted a memorial service in the Angel Bank Chapel on December 22nd.

Mary was born in 1835 to parents Timothy, who worked the land, and Sarah.

Before her marriage Mary worked as a dressmaker (1861)