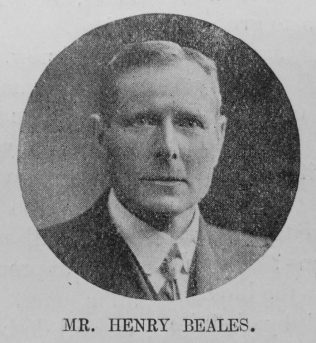 Henry Beales laboured at Upper Moss Lane Church, Manchester, for nearly fifty years, and he made a deep impress on the lives of thousands of young people, not only in Manchester, but in all parts of the United Kingdom. He was one of the most gifted and devoted Sunday School workers in Primitive Methodism, and he served for many years as a member of the National Sunday School Union. Born at North Lopham, Norfolk, in 1845, Henry Beales commenced life in a small village.

For three generations the Beales’ family were ardent workers in the Methodist Church. The grandparents of Henry Beales were staunch disciples of John Wesley, but, joining the Reform movement they allied themselves to a more democratic Church. John Beales, the father of Henry Beales, was a devoted Primitive Methodist, and for many years was known in many parts of Norfolk and Suffolk as a most acceptable and able local preacher, labouring with men like Robert Key, Henry Alderslade, and Richard Howchin. The mother of Henry Beales was a most remarkable woman. Great in intellectual gifts, she was greater still in her devotion to God and Primitive Methodism. In the early “fifties” Mr. and Mrs. Beales migrated from Norfolk to Manchester, and joined our Church in Upper Moss Lane. Henry Beales, with his surviving brother and sister, were trained in Moss Lane Sunday School, and for forty-seven years the name of Henry Beales stood on the school roll as scholar, teacher, and superintendent.

During the ministry of the Rev. James Macpherson, Henry Beales was converted, and he was wont to tell with great emotion, that, as he knelt before the Cross of Consecration, he said: “Lord, what shall I do?” and at once the answer came— “Yield thyself and every power to do My will.” And he did. He lived to do his Lord’s will. In the low slum, the ragged school, the Band of Hope, the crowded public meeting, the pulpit, and from the rostrum of Moss Lane Sunday School, where he ruled like a beloved king, Henry Beales yielded every power to do his Master’s will. Not only in Manchester and Lancashire, but all over the Kingdom, our friend was known as a wise and zealous temperance worker, as a Sunday School expert, as a remarkably able and inspiring speaker, as a hater of all shams and meanness, and as a true and broad evangelical, who ever sought to lead others into personal fellowship with Jesus Christ.

His chief work, however, was done in the Sunday School. He was a prince among young people, and there are old Moss Lane scholars scattered all over the world, who owe their highest and best to Henry Beales. Little children loved him. Elder scholars made him their ideal, and in the days that are yet to be, many will love truth, hate evil, and do valiantly, because they came under the personal influence of this truly great Christian man. To a multitude he was the best friend they ever had.

He found situations for scores of young people, as they entered business life, and if any slip was made no effort was too great to redeem. For all he met on life’s highway he had the cheery smile and the helping hand; and, by his practical piety and sunny optimism, he captured a host of people for the Lord Jesus Christ.

“And so the years flowed on, and only cast
Light, and more light, upon the Shining Way,
That more and more shone to the Perfect Day.”

On June 27th, 1909, the end came somewhat suddenly. The funeral was a marvellous tribute to departed worth. The Upper Moss Lane Church was crowded with representatives of every creed and class in the community. Canon Hicks, of Manchester Cathedral; Dr. Goodrich, ex-chairman of the Congregational Union; the Rev. S.F. Collier, of the Wesleyan Central Hall; Dr. Peake and Principal Jones-Davies, of Hartley College; and scores of other clergymen and ministers, with city councillors, magistrates, doctors, and lawyers, sorrowed with the bereaved wife and son and daughter. The streets of South Manchester were lined with thousands of stricken people as the cortege passed to the Southern Cemetery. That funeral procession was like the passing of a king. But Henry Beales had been uplifted to see the King in His beauty, and he had passed on to serve in the Better Land, which we wrongly deem afar off.

He married Fanny Rains (1864-1943) in the summer of 1889 in Manchester, Lancashire. Census returns identify two children.