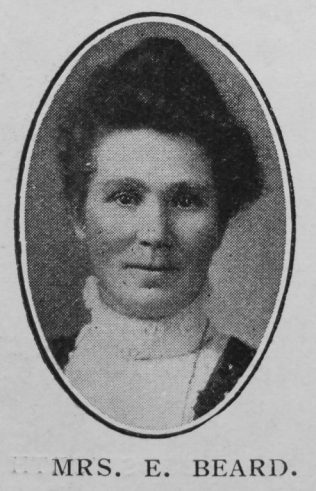 A great loss has befallen Ramsbottom Street, Crewe First, by the early death of Mrs. Beard, wife of Mr. Eli Beard, Station Steward. Brought to Crewe when a child, she immediately joined the Sunday School, to which she gave life-long devotion. Married twenty-seven years ago, home duties never lessened her zealousness; nothing but absence from home or illness prevented attendance morning and afternoon, every Sunday. Her last active year saw her Superintendent in the girls’ room, and every scholar, except the Adult Class, received a birthday letter. These were written three weeks ahead, so that no emergency could cause disappointment. For many years Mrs. Beard taught the girls’ first Class, and since her death many letters, telling gratefully of indelible impressions have been received.

Although the only lady present, she regularly attended the Quarterly Meeting as the School representative. She was the first lady in the Tunstall District to receive the triennial certificate, and to be placed on the roll of honour. The S.S. Union awarded the teachers’ diploma of honour for long service. In choir, Bands of Hope and bazaars she acted with typical vivacity and energy.

In home life her influence was at the highest. A perfect ideal of marriage was realised. As wife and mother nothing better could be desired. Her love surpassed verbal expression; hospitality to all Christ’s servants was her delight.

Mrs. Beard’s life was not without shadows. For the last three years she suffered acutely, but always patiently. On Sunday, December 24th, 1911, at Wistaston, the Master called her home, leaving husband and daughter to cherish her precious memory.

Maria was born in late 1861 at Wolverton, Buckinghamshire, to parents Henry Lane, a boiler maker (1871), and Maria Groyther.

The 1881 census return records Maria working as a fashion cutter.