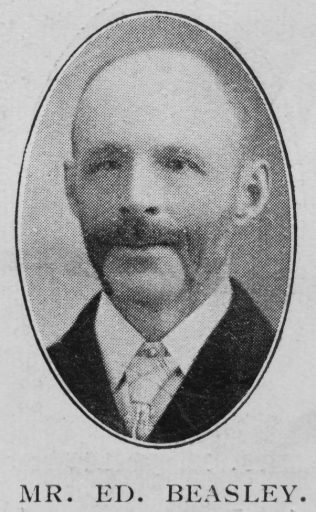 The death of Edward Beasley, of Stewkley, came with startling suddenness at the early age of 47 years. The son of godly parents, and constantly surrounded with the holiest influences, he early surrendered to Jesus Christ. He was an acceptable local preacher; but he excelled in the Sunday School and Band of Hope, and in these departments rendered faithful and efficient service. As caretaker of the large and beautiful church in the village, his place will be hard to fill, for his courtesy, and willingness to oblige are beyond praise.

He must have suffered without complaining for a long time, for only a month before he died the doctor informed the anxious friends that the case was one of cancer in the stomach. He bore it all with unmurmuring submission and Christian fortitude, and then like a tired child fell asleep to awake in the brighter life.

He leaves behind a wife and three boys, for whom the tenderest sympathy is felt.

“Tis sweet, as year by year we lose
Friends out of sight, in faith to muse
How grows in Paradise our store.”

These three brethren*, whose work and worth are chronicled all too briefly on this page, all rendered faithful, arduous and devoted service. They served in different ways, but all strove to please the Master. Two of them lived far beyond the allotted span of life; the third was called away in the prime of life, stricken down by the most mysterious disease of our age. But service cannot be measured in years alone. Each has, we believe, served his generation by the will of God.

Edward was born abt1863 at Stewkley, Buckinghamshire, to parents Thomas, a hawker (1881), and Mary.

He married Mary Webb (1864-1956) in the spring of 1884 at Stewkley, Buckinghamshire. Census returns identify three children.

Edward died in the summer of 1910 at Stewkley, Buckinghamshire.

* The three referred to here are Edward, Jonathan Beasley & Thomas Pitkin whose obituaries are together in the 1910 Magazine.