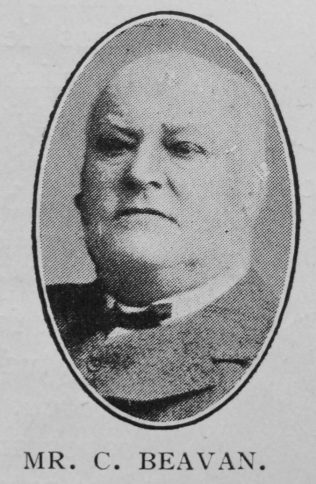 Charles Beavan was born at Clehonger, near Hereford, May 23rd, 1840, and finished his earthly pilgrimage in calm assurance and peace at the Lawns Farm, Llanwarne, in the same county, on July 10th, 1913, in the seventy-fourth year of his age. He enjoyed the priceless advantage of a godly parentage, both father and mother being devoted members of our Church. From his earliest years he manifested a religious spirit so marked that, when only eight years of age, his name was entered in the class-book as a church member. True, the continuity of his early religious experience was not wholly preserved, but when on the threshold of early manhood he re-consecrated himself to God and maintained his allegiance until the one “clear call” to the higher service.

At the time of his decease he was the oldest local preacher on the plan of the Kingstone Circuit, a position he had sustained with great acceptance and usefulness for fifty-three years.

He was also keenly interested in public affairs, for seventeen years he served on the Hereford Board of Guardians, was a strong and convinced Liberal, and at one time a vice-president of the South Herefordshire Liberal Association. But his chief interest centred in the affairs of his Church, among the most cherished memories of his public life being his appointment to represent his Circuit in the District Synod, and his election as delegate to the Derby Conference of twenty-seven years ago.

During the last two years his health perceptibly declined. He knew his end was near, but his heart was unafraid. On Monday, July 14th, in the quiet burying-ground of Llanwarne Church we laid him to rest.

Charles was born on 23 May 1840 at Clehonger, Herefordshire, to parents William Beavan, a carpenter (1851), and Catherine Jones. His brother Arthur was a PM minister.