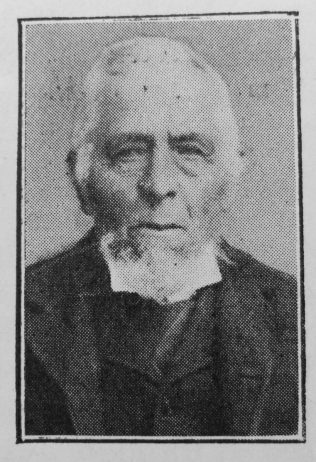 Matthias Beavan was born at Yarpole, Herefordshire, and died at Woodbrook, Kington, in the same county. He saw his eightieth birthday ere he left for Home. He was a man of cheerful temper and buoyant spirit, with a firm faith in God. He was converted as a youth, and for over sixty years has been faithful. Some time after his conversion he removed to Leintwardine, where he prospered in business and was useful to the Circuit as a local preacher and class leader. At that time the circuit had palmy days, hundreds were converted. He loved to tell of these times, their memory was precious to him; his eye would fire, his face glow, and his whole frame become electric when reference was made to Leintwardine.

In the year 1866 he came to Kington, Presteign Circuit, and for forty-one years he has served the circuit as local preacher, class leader and Sunday School worker. When journeys were long and travelling rough our brother went to his appointments and manfully proclaimed the truth. His efforts were always acceptable and fruitful. The latter years were given mainly to Kington. He was twice married and very fortunate in both unions. The widow he leaves behind has been a faithful and devoted wife, seeking his comfort in every possible way.

The end came suddenly and unexpectedly. Dying to him was translation. He will be missed by his family at home, by his friends in the neighbourhood and at chapel, missed by his trusty pony and faithful dog.

The funeral was largely attended, the service was conducted by the minister assisted by the circuit steward and others. According to his wish his favourite hymns were sung on the way from his home to the grave.

His death was improved on the following Sunday by Mr. William Davies of Presteign, a large congregation being present.

Matthias was baptised on 27 March 1826 at Yarpole, Herefordshire. His parents were Richard, a carpenter, and Mary.

Matthias married Mary Townsend (1826-1889) in the summer of 1855 in the Ludlow Registration District, Shropshire.