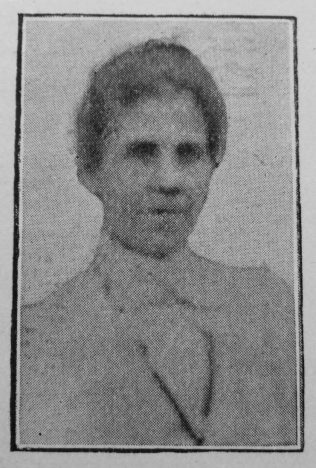 Transcription of Obituary in the Primitive Methodist Magazine by E. Parsons

Mrs. Beckley, the wife of Mr. Baruch Beckley, and daughter of our esteemed Circuit Steward, Mr. E.E. Cooper, has been associated with Hill St. Church in the Brierley Hill Circuit all her life. Entering the Sunday School as a little child she afterwards rendered most useful service as teacher. She was a true Christian and will be long remembered for the fine qualities of her character; self-sacrifice, patience and courage were beautifully manifest throughout her life. She experienced sorrows and difficulties but met them all with a firm, Christian fortitude. She was seen at her best in the quiet spheres of life; as wife, mother and daughter she was all that could be desired. The last six months of her life were passed in great suffering but those who were privileged to visit her at that time saw very clearly how strong was her faith in God, and her last expression was one of triumph. She died December 29th, 1906, and was interred in the family vault in Brierley Hill churchyard, January 2nd, 1907. Our sympathy goes out to her sorrowing relatives, who, however, will always value her memory as a priceless legacy, for it is verily true in her case that “she being dead yet speaketh.”

Selina was born abt 1859 at Brierley Hill, Staffordshire, to parents Ebenezer Elias Cooper, a lime and timber merchant (1881), and Abigail.

She married Baruch Beckley (abt1857-1948) in the summer of 1884 at Brierley Hill. Baruch was a cycle agent. Census returns identify three children.