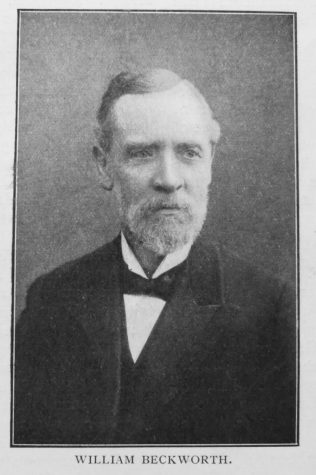 Transcription of article published in the Primitive Methodist Magazine by J.S. Waltham Stanwell

CARLYLE said of Cromwell that “his life was a sacred isle, girt about with God-heads and eternities.” The figure of a noble river would better typify the life of him who has just left us; not an impetuous current, but a stream calm and broad and deep. Let us trace its source.

Near Holderness Road in Hull in the “hungry forties” was a home where a bedridden saint “spent weary hours working for bazaars she never could visit, and chapels she could never see.” Francis Beckworth, the head of that home—devoted man—kept open doors for one Henry Parker’s class meeting. He himself was a local preacher of exceptional eloquence, which, however, was in after years to be surpassed by that of his son William, then old enough to go round and summon neighbours to preaching services in his father’s house, and to collect for missionaries. This boy had been baptised by “Father” Clowes, and, holding the hand of his father, had made one of the twenty thousand people who had witnessed the patriarch’s interment. Francis Beckworth succeeded to the leadership of Clowes’ class.

There was, too, an aristocratic old schoolmaster in that neighbourhood who, himself a scholar, imparted sound knowledge, and taught its use—a thinker and a man-maker. William Beckworth was, by him well educated.

In 1855 at the age of fourteen the youth went to Leeds into the service of Mr. Richard Nickalls of the Joppa Tannery. At twenty-eight he became a partner. Later came the independent firm of “Wm. Beckworth and Sons, Ltd.,” then “Beckworth’s, Ltd., London.” Diligence in business was part of his faith. The confidence thus reposed in him grew, as was inevitable. Social, political, educational and Connexional demands were made upon him. In 1873 he was helping Sir Andrew Fairbairn to build the first Leeds Board School. His stone-laying speech was a masterpiece of detail.

He became a founder and one of the first trustees of the Yorkshire College, which proved the germ of the splendid Leeds University of to-day. Of the latter he became head of a technical branch, and a life governor. He was one of a privileged group to secure King Edward at the opening of this noble institution. To him education appeared vital to our Connexional interests. The solution to the “Young people problem” must be found, and the Sunday School Union was formed. Deservedly was he made president.

After grand service at Rehoboth he was to be found at Belle Vue, an ornament to the plan and also presiding at the famous Bible classes. For a quarter of a century did he there inimitably dispense the sacred truth. There he proved himself a manmaker. Hundreds can bear witness to the fact.

Then the cause of ministerial training found in him a champion. With the help of James Travis and sainted Macpherson, “the prolonged and bitter struggle was fought out.” It is too long a story to tell; enough to say it is full of honour to his name.

William Beckworth could not confine himself to narrow interests. He became President and Treasurer of the British Society which preaches the Gospel to the Jews. Africa too! Our Missionary Committee took up foreign work; his was the first treasurership of the Society. He was a missionary enthusiast all his days.

And how Leeds trusted and honoured him! In 1890 there was a lock-out and riot. He and Col. Harding became intermediaries. When the two peacemakers entered the men’s committee room no howl of execration greeted them. There was respectful deference, and a ringleader spoke up to the rest: “Lads, let’s put out pipes out, Mr. Beckworth won’t like them.”!

Honoured by labour, he was honoured also by capital. The Leeds Chamber of Commerce called him to its chief seat and would have kept him longer there, but he never would monopolise any office. “People get into ruts,” said he, “institutions are better for shaking up.” Several times did he refuse the Leeds mayoralty. He became a Borough Magistrate in ’91 and J.P. for the county in ’92.

A power in political life, he followed Sir James Kitson to the chair of the Leeds Liberal Federation. Said one, “He was a statesman amongst politicians.” Tories and Radicals alike found him resolute, courteous, never bitter, always luminous. His reputation, political and commercial, remained stainless.

Whatever position he occupied he adorned. Placed upon the Hymnal Committee, he rendered excellent service. Entertaining in his home John Dillon or William O’Brien, General Booth or G.J. Goschen, he was ever at gracious ease. Presiding at mass meetings for Morley, Asquith, or Rosebery, his personality was always dignified and attention rivetted while he spoke.

Repeatedly and by many constituencies was he invited to seek parliamentary honours, but for various reasons he declined, as did he proposals of our own Conferential Chair. Considerations of health and great pre-occupation otherwise prevented him. Physically frail, yet he was ever busy, never wasting a minute.

It would be impossible within these limits to adequately write of the manifold interests and activities of our departed leader. We would so gladly have told the story of his large and generous gifts to the cause, of his ardour for evangelistic extension as shown, now by the gift of a furnished tent, now by the provision of an iron room. We would have recalled, had we had space, some of his words of counsel which were even more valuable than his liberal financial gifts. How greatly would we rejoice to picture his home life. Who can tell of his rare tenderness and charm there? No wonder his sons and daughters have so nobly and unostentatiously served their father’s Church. The wife he leaves ever shared his sorrows and burdens— a noble partner, thinking little of self if his usefulness could be extended yet more. No criticism of the Church was ever allowed in the family circle. Lovers were Mr. and Mrs. Beckworth to the last.

Speaking to Enfieldians at their prizegiving, he said: “Boys, you will understand me when I say, ‘Play the game of life!’ That means—Be upright, straightforward, honourable and true. Master self; establish self-control. Never crouch or sneak or crawl; man was intended by the Creator to walk erect. So live that you can look every man in the face!”

The River has joined the fulness of the glorious Sea.

William was born in 1841 at Hull, Yorkshire, to parents Francis beckworth, a cartman (1851), and Elizabeth Appleton.