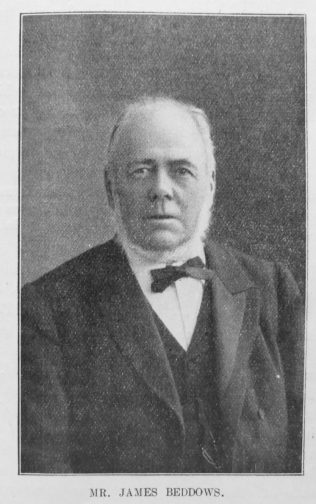 An Article published in the series Links with the Fathers by Rev. James Shepherd

THERE are few living voices to call up the heroic past, and thrill us with their personal delineations and glowing realistic descriptions of the splendid type, character, work and spiritual triumphs of the founders and pioneers of our Church. It would be difficult to find a more typical, honoured and valuable link with our fathers than James Beddows, born in 1835, a Methodist of three generations, linking up without a break to the memorable and stirring times of the Wesleys. Around his life gather the brightest and most glorious traditions of our Church. For fifty-eight years he has maintained an unbroken membership, and for fifty-six years has been one of our ablest, most powerful and successful local preachers.

No living man has a more intimate personal knowledge, has shared the confidence and friendship, or travelled and preached more with the distinguished fathers and princes of our church than Mr. Beddows. With John Petty, the Garners, the Antliffs, Thomas Bateman, Philip Pugh, Henry Higginson, Thomas King, George Bagley, Richard Jukes, Samuel Tillotson, James Huff and others equally honoured and distinguished, he has travelled, laboured and preached. For more than eighty years the Beddows’ home has been open, and a warm welcome and generous hospitality has been -extended and given to the ministers and laymen of our Church. The venerable Hugh Bourne was entertained for a week by Mrs. Beddows’ mother, and Mr. Beddows now owns the cottage at which he stayed. Coming as he does from such a splendid Methodist stock, a child and now a father in Methodism, gathering up and preserving to us in his long and strenuous life the finest elements, the best traditions, and most sacred memories of our Church, he is, at the age of seventy-four, one of the most venerable, interesting and charming personalities among us.

Few men are more widely known, trusted and revered for their character, exceptional ability, wise statesmanship and sterling worth by our Church in the Midlands than he. For fifty years he has been an outstanding figure, an influential voice and force in our Church Councils. Mr. Beddows possesses in a marked degree the essential characteristics and qualities which make for true statesmanship and effective leadership. You cannot look upon him, or be brought in contact with him, without feeling that you are in the presence of a man of marked personality and power.

He is a man of fine build and commanding presence, with a transparently clear and open countenance. He possesses a splendid brain, an acute intellect and a judgment sound and unerring, a clear full voice and a rich vocabulary—a man of independence and self reliance, with high ideals, wide outlook and large sympathies. As a preacher, speaker, lecturer, controversialist or statesman, he is equally marked and distinguished. From his youth up, he has been a keen observer and close student of men, of movements and of books. His knowledge of human nature and insight into character, his close acquaintance with literature, his thorough knowledge of history, ancient and modern, his masterly grip of British and foreign politics and the inwardness of social and economic movements have not only given him position and power, but marked him out as a distinguished leader of men and movements.

For many years he was the recognised leader of the Liberal and Progressive forces of the important borough of Walsall and district. For eighteen years he was one of the most prominent and influential members of the Borough Council, and for thirteen years represented Nonconformity on the School Board, being twice pressed to take the chair of that important body. He was a member of the National Liberal Federation, and not only sat in Council, but was an intimate friend and worker with John Bright, Joseph Chamberlain and Dr. Dale. He is a typical, sturdy, militant Nonconformist, and years before the ‘‘National Free Church Federation” was dreamed of he was in the field confronting the cleric and the priest and addressing large audiences on the questions of Disestablishment, tithes, the charities, public cemeteries, and the preservation of common lands to the people. The present position and power of Nonconformity in the Midlands is largely due to the earnest work and consecrated statesmanship of men like Mr. Beddows in the years that are gone. It is, however, into our Church that the stream of his active life, the power of his intellect and heart have ever poured, and Primitive Methodism to-day possesses no more earnest, devoted and distinguished son than he.

Strong, influential and revered as he is in the District, he is even more honoured, trusted and admired in his own circuit, where he has lived and laboured for over fifty years. In the Lichfield and Bloxwich station, he, with the good John Nicholls, whose niece he married, have walked thousands of miles to preach the gospel and attend circuit meetings. Since the division of the circuit thirty years ago Mr. Beddows has wisely spent his life and consecrated his energies to the building up, extending and consolidating of the various interests of the station, and it is largely due to his wise guidance and statesmanship that the Bloxwich and Cannock Station has developed into one of our most powerful, self-reliant and progressive circuits. He has lived for his circuit, has largely shaped its policy and ever led it forward. Every interest has been carefully watched and promoted. Ten chapels have been built at a cost of over £13,000, all of which have been placed in easy circumstances. He has done much to make Primitive Methodism widely known and respected in this district.

Thirty years ago, a gentleman in Walsall was so impressed with his work and worth, that he sought him out, and requested him to find two responsible men to act with him as co-trustees, and conveyed to the circuit, free of cost, cottage property to the value of £2,500. In the Circuit Quarterly Meeting, in the District Meeting or Conference, he is equally at home and distinguished. He has represented his circuit in thirty District Meetings, and has been a delegate to nine Conferences, has frequently sat on important Connexional Committees, and served on important Connexional deputations.

He has been most fortunate and happy in his home life, and owes much of what is brightest and best in his public life and character to his charming wife, who was one of the finest, sweetest, most devout and saintly women we have ever known. She has gone from earth to heaven, but our brother remains with us, a venerable father, a wise counsellor and faithful friend. Though full of years, his spirit is bright, hopeful and young. His face is toward the light, and the stream of his active, stirring and useful life is gathering itself into one splendid volume ere it breasts the eternal sea.

James was born in 1835 at Dawley, Shropshire, to parents Richard, an iron stone miner, and Ann. He was baptised on 8 March 1835 at Dawley Magna.

He married Eliza Green (1828-1896) in the spring of 1859 at Bloxwich, Staffordshire. Census returns identify five children.

James died on 27 February 1913 at Bloxwich, Staffordshire. He left an estate valued at £5k.