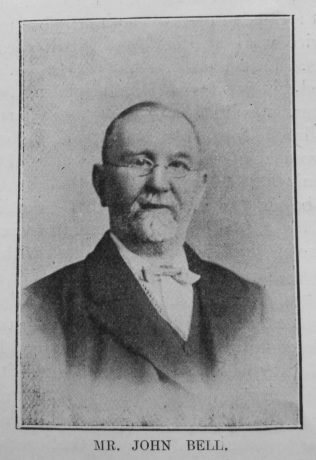 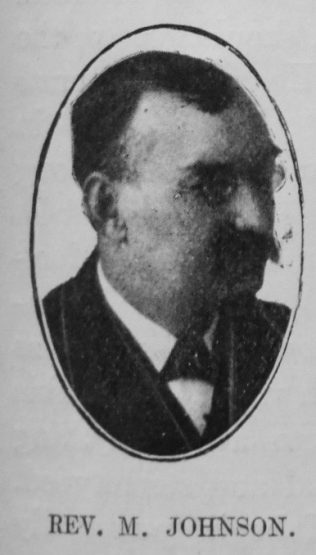 Transcription of Sketch in the Primitive Methodist Magazine by Matthew Johnson

JOHN BELL is a class leader and local preacher in the Hetton Station. Born at Carville, in the Durham Circuit, over sixty years ago, he was converted at a Sunday morning service while still in his teens. Last year he completed his jubilee as a member, receiving a beautiful Illuminated Address from his Church, and a Hymnal from the Hetton Quarterly Meeting, as souvenir of the occasion. Beginning work as a boy in the mine, he has gradually risen step by step, and is now Assistant Manager of one of the largest collieries in the country. Though an exceedingly busy man with heavy responsibilities, he makes time to faithfully attend to his religious duties, and no person could be more regular in his attendance at the services both on Sundays and week nights. He is Secretary to the Trust, Treasurer for the Circuit Houses, and Trustee for a large number of chapels. Blessed with splendid health, Mr. Bell revels in work alike in his profession and in the Church. There are several large and important churches in Durham county which he may claim to have had a great deal to do with originating and developing. In the exigencies of his calling he has had to live in various villages, and in those cases where we have not had a society he has been pressed to join another church, but he has invariably replied, “I love all the churches of Jesus Christ, but I am a Primitive Methodist, and I shall do all I can to establish a class and a cause here.” And what is more, he has always succeeded in doing so. Very often the class has met in his own house until such time as some other room has been available. The Revs. Matthew Reavley and Joseph Reavley are ministers of our own Church, from classes formed by Mr. Bell. StationTown, in Wingate Circuit, a large and important church, was begun mainly at his suggestion and by his efforts: and there are several others up and down the county. He has resided at Murton Colliery since 1887, and here as usual his hands are full of work, both religious and secular.

Mr. Bell became a class leader soon after his conversion, and though, on account of his migrating from place to place, it has not been continuous, he has generally held the position. He has at present a large and important class of forty-seven members. He is well fitted by temperament and experience for that position. Sanguine and sunny, genial and sociable in disposition, and withal acquainted with stress and struggle in his own life, he is an almost ideal leader. Believing as be does that the class meeting has its warrant in the needs of the human heart, and is justified by Scripture and experience, he does not hesitate to declare that both leader and member are the better for their attendance. “Still, as in the days of Malachi,” he says, ‘‘believers require to meet together to talk to one another and to think upon His Name.”

Mr. Bell’s idea of leadership is high. “The class leader,” he told us, “should make himself truly serviceable to the members, and avoiding all that is stiff and objectionable in manner, try to gain their confidence and inspire their affection. Sympathy, true, practical, and deep, is indispensably necessary. While not blind to their peculiarities and weaknesses, he must adapt his bearing and teaching so as to secure their highest well being; as faithful in reproof when it is necessary, as in appreciation.” Mr. Bell regards an intimate acquaintance with the Scriptures as an important factor in a successful class leader. To use his own words, “However clear, appropriate, and varied his own remarks, observations, and counsels may be, they cannot equal suitable and well-chosen portions of Scripture which are as apples of gold in pictures of silver. The apt promise, the timely caution, the plain warning, under the influence of the Holy Spirit, will always be most effective and telling.”

Replying to our question as to what he considered the main qualities in a class leader, Mr. Bell said, “He must be regular in his attendance, not only at his class, but at all the services, so as to be an example to all. No ordinary cause should keep him from his class. He should make interest, pleasure, ease, comfort, company, and all other things bend to this, never allowing himself to be absent except under most exceptional circumstances. No class will continue to prosper whose leader comes short in this. It is like an army without a general, a school without a teacher, and a colliery without a manager. Punctuality is also highly necessary.”

And we know that this is a strong point in all Mr. Bell’s affairs. “Attention to discipline is a third quality required. The leader ought to have a knowledge of Connexional rules and usages, and as far as in him lies see that they are carried out. I also hold strong views as to the relation of the leader to the finances of his class and circuit. The collecting of the class moneys weekly is one of the best methods. I call the roll at each meeting and put down my own class pence, and encourage others to do so. In this way many persons can be got to contribute, who might deem themselves unequal to paying at the end of the quarter. Visitation is another point necessary in a leader. If he cannot find time or opportunity for this work, he should get an efficient visitation committee appointed. As early as possible absentees should be seen. I believe that if visited in time, some of them might be prevented from becoming backsliders. In a word, whatever would tend to promote the best interests of the church as a whole, should receive the support of the leader. He will co-operate with the ministers and other officials in extending the Kingdom of God among men.”

Asked to describe the method of conducting his class, Mr. Bell stated that he endeavoured to secure as much variety as possible and to avoid anything formal and stereotyped.

“I begin punctually at the appointed time, by giving out a hymn, and then ask two or three to pray briefly. We sing another hymn, often: 378, “I lift my ‘heart to Thee,” or 414, “O Jesus, I have promised to serve Thee to the end,” for these are two of my favourites, and most appropriate for a class meeting. Our splendid Hymnal, which in my opinion is almost without an equal, is full of fine sentiments finely expressed. I then read a Psalm or a portion from the New Testament, after which I give my experience, and ask the members to do the same. At intervals any member is at liberty to raise a suitable tune, the fervour and fire being kept up to the end. Anything exceptional in any of the experiences I am accustomed to refer to, and to give the word in season, driving home the lesson or enforcing the exhortation as seems to me most fitting. On other occasions I give short accounts of my visit to the District Meeting or Conference, or describe some special service I may have recently attended, some revival I have taken part in, or some special preacher I have heard while on my holidays. In this way I try to make everything serve the purpose of edification. Variety, freshness, and above all, utility, are the features I keep before my mind. Before closing the meeting I always shake hands with all present, and speak a kindly, helpful word to them. Our class meetings are always felt to be times of refreshing, coming from the hands of the Lord.”

Mr. Bell, being an expert financier, pays special attention to this important side of a class leader’s duties. He is himself a generous supporter of all good causes, and his example has a healthy effect upon others. And while in full sympathy with those who deem themselves unable to pay class-money, he has but little patience with those who, financially able, do not support the cause. Nor does he hesitate privately, but pointedly, to appeal to those who are remiss in this respect.

Based on the information provided in the article, I have been unable to locate John Bell in census returns. Can anyone point me in the right direction?