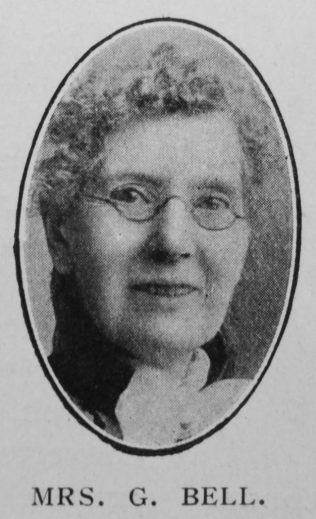 Martha, the beloved wife of the Rev. G. Bell, passed away on Tuesday, April 23rd, 1912. She was converted in early life at a mission conducted by General Booth in the Methodist New Connexion Chapel at Yarmouth. Her parents objected to her joining the above-mentioned society; however, she joined our Church, and kept an unbroken membership with it for nearly sixty years. She was married in the year 1858, and for forty-six years shared the joys and trials of a minister’s wife. During those years she entered into the work of the several circuits, and was a true helpmeet in every department of her husband’s aggressive ministry and service for the Church. As an old friend and colleague said at the service held prior to the interment, “Our brother has lost a splendid wife, who made possible the work he has done in East Anglia and elsewhere.”

Wherever she lived she commanded respect from all that came in touch with her, she did good work in the Sunday School, the fruits of which remain to-day, and she also sought by personal contact to lead people to Christ, success in many cases crowning her efforts. In 1904 she retired with her husband to Wisbech. They had toiled long and valiantly in service and looked forward to a bright and calm eventide. Four years ago symptoms of mental failure developed, which gradually grew worse until she passed from the afflictions of earth to the joys of heaven.

She was laid to rest in the Leverington Road Cemetery. The coffin was first taken to our Church Terrace Chapel, where a short service was held, in which Rev. C. Shreeve (Ely), the Rev. J.W. Whittaker and A.E. Rose took part. The following Sunday morning a memorial service was held.

Martha was born in 1834 at Great Yarmouth, Norfolk, to parents James, a mariner, and Jemima. She was baptised on 11 July 1834 at St Nicholas, Great Yarmouth.

She married George Bell (1833-1916), a PM minister, in the summer of 1858 at Great Yarmouth, Norfolk. Census returns identify six children.