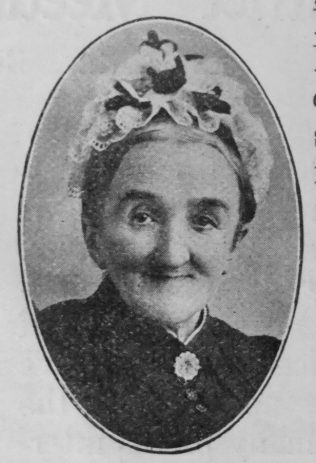 Another link with the past is severed with the death of Eleanor Bengry, of Sandpits Church, Ludlow, which took place on March 13th. A native of Tuckford, Salop, she was born October 1st, 1832, and reared by her grandparents, Mr. and Mrs. Hammond, of Sutton Hill, by whom she was occasionally taken to our services. At the age of fourteen she entered domestic service in Ludlow, and attended our chapel and school in Old Street. As a girl she was sanguine in temperament, of high spirits, and showed a natural bias in favour of the religious life. Later on she was married to Mr. Samuel Bengry, of Hayton Bent, who survives her, and nominally connected herself with the church of which he was a member. Frequently she, with others, would walk to Ludlow services, entailing a return journey of from fourteen to sixteen miles. On one such occasion, the preacher, who seems to have been a man of original methods, placed a form in front of his congregation and invited all to step over it who were ‘‘soundly converted.” Mrs. Bengry, on trying to do this as others did, was quite unable, and falling in penitence before it, experienced such a change of heart, that her fifty-four years membership was dated from that time.

The latter part of her life was spent near Ludlow, and in fellowship with our Sandpits Church. She was exceptionally fond of her class meeting, and scrupulous in the payment of her quarterage. In her age she contracted an uncommon affliction which caused death to come as a benediction. In the midst of excessive weariness and exhaustion she was very patient. The visits of her ministers and leader were warmly welcomed, her confidence was unshaken, and her end peace.

The record of her marriage gives her surname as Hayway. I have not been able to identify her in any records before 1853.

Note: All records identify her as Ellen, not Eleanor.