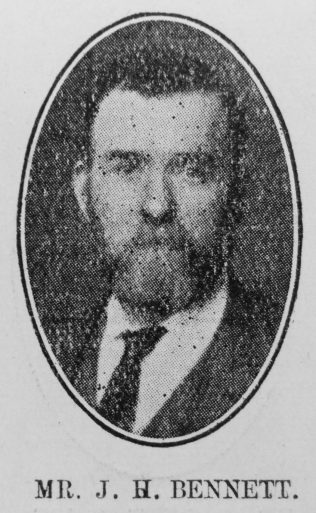 Transcription of Obituary published in the Primitive Methodist Magazine by J.W. Waddell

MR. JOHN HENRY BENNETT.—Barnsley First Circuit and Kingstone Place Society lost a valued official by the passing of John H. Bennett in his fifty-sixth year, on December 10th, 1908. He was converted some twenty-six years ago, being led to Christ through the death of his little daughter Rosa at five years of age. Joining the society at Kingstone Place he took an active interest in the work, for he was Society steward, class leader, Sunday school superintendent and secretary of the trustees, besides being caretaker when he died.

In his somewhat long and painful illness he was very patient and always, when able, made his way to the sanctuary, where the means of grace were much enjoyed.

For over a year he dwelt on the borderland, but he was ready for eternity. His last words were, “Lord, do help me,” and he passed, to be for ever with his Lord.

The Rev. Thomas Markwell, in writing of him said, “He was a good man, a judicious, trustworthy, generous office-bearer of our church at Kingstone Place, generally respected by all who knew him in the circuit. My visits to him were times of spiritual refreshing.”

Our brother filled a large place in the life of this church, and was a kind husband and a good father. His widow with two sons and two daughters, mourn his loss.

A memorial service was held on December 20th, conducted by the minister. “He being dead yet speaketh.”

John was born abt1852 at Silkstone, Barnsley, Yorkshire, to parents John, who worked the land, and Mary.

He married Martha Ann Kitringham (1850-1918) on 17 May 1869 at Ardsley by Barnsley, Yorkshire. Census returns identify six of ten children.