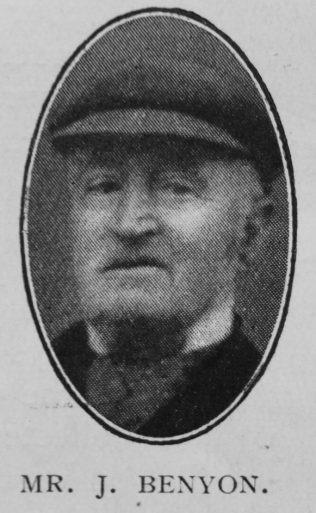 The passing of John Benyon, of Brockton, at the age of seventy-eight, has removed from our Worthen Society a devoted worker and a noble Christian. Over fifty years ago he joined our people at Broomfields, in the Hadnall Circuit, afterwards spend-ing twenty-six years in Liverpool, whence he removed to Brockton to spend the last twenty-four years in connection with our society at Worthen, for many years superintending the Sunday School and acting as chapel treasurer. At the time of his death he held the offices of trustee, society steward, and assistant class leader. He always lent a helping hand to the aged, the afflicted and the poor, and rejoiced to open his house to the preachers. He died in the Salop Infirmary on July 6th, 1911, and was buried in Worthen churchyard. A memorial sermon was preached by Mr. W. Bridgwater.

He married Martha Stephens (1837-1914) in the summer of 1860 in the Atcham Registration District, Shropshire. Census returns identify one child.