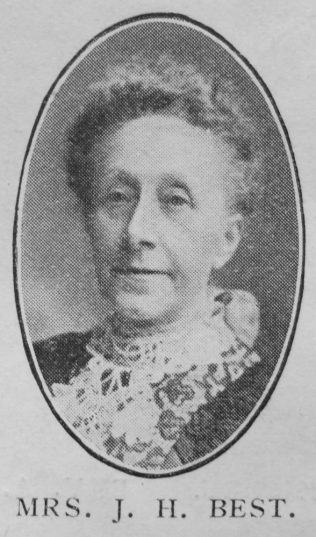 Caroline E. Best, the devoted wife of the Rev. John H. Best, was born May 1, 1844, and departed this life December 2, 1908. They were married on July 4, 1871. It would be contrary to his desire, as well as her modesty, that much should be said of their home life. Mrs. Best was a true housewife, genial, kind, and hospitable. She was her husband’s sympathetic companion and co-worker in al! the aims and labours of his long career of high and noble service. A source of strength and comfort to him, both in his early manhood and in his riper years. It seemed all so strange, and yet so fitting, that in their death they were only divided by the brief interval of three weeks. They had climbed the hill hand in hand, and stood on its summit together. Thus after sixteen years of the most strenuous toil, full of alternations of joy and sorrow, hope and fear, they rejoiced in the realisation of their most cherished ideal. Then he was taken, and she was left.

“Not in anger, not in wrath,
The reaper came that day.”

Three weeks later, to the very day, and almost the hour, she, too, was gathered home, lamented by a vast number of loving friends. And so it might truly be said, husband and wife were not divided even in death.

“For all Thy saints, who from their labours rest,
Who Thee by faith before the world confessed,
Thy name, O Jesus, be for ever blest.
Hallelujah !

O may Thy soldiers faithful, true, and bold,
Fight as the saints who nobly fought of old,
And win with them the victor’s crown of gold,
Hallelujah !”

Caroline was born on 1 May 1843 at Bristol, Gloucestershire, to parents William John Cecil, a toy dealer (1861), and Eliza Silver Dee.