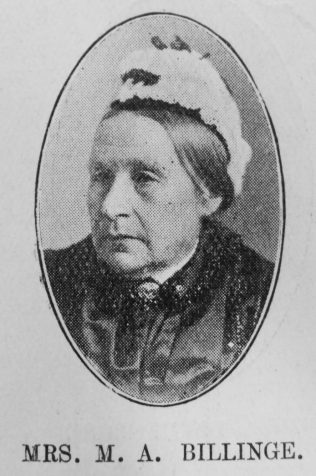 Transcription of Obituary published in the Primitive Methodist Magazine by S.A.B.

Born March 20th, 1820, Mrs. Mary Ann Billinge, of Derby First Circuit, passed away April 5th, 1909. She was one of the most beloved and venerated ladies in her native town. A Sunday School teacher for fifty-four years, an earnest supporter of the Temperance cause, a true friend of the ministers who were ever welcome at her home, she was one of God’s elect. Of good social position her parents gave her a superior education. Her Christian course had begun prior to her marriage. She then joined the church of her husband. The late Mr. William Billinge was a valuable local preacher and official, intelligent, liberal, reliable and judicious. He died in 1891. Their married life had its full share of trial and vicissitude, the loss of their children being one of the heaviest blows. One, a bright Christian girl of eighteen, died in 1868, and was followed six months later by the only remaining child. Mrs. Billinge felt these sorrows very keenly, but though “the flesh faltered faith drank the cup,” and the sweetness and brightness of her piety remained undimmed.

She will be best remembered as the teacher for over half a century of the young women’s class in Traffic Street School. This work she continued till nearly the close of her long life. Generations of elder scholars have found in her an instructive teacher, a wise adviser and friend. The freshness of her thought and feeling was remarkable. She became aged but did not grow old. The dew of God’s eternal morning was upon her spirit.

An illuminated address and a large framed portrait of herself were presented to her by the teachers and scholars. One of her last acts was to order that her usual donation should be given to the School Anniversary.

She helped to raise large sums of money for the church and interested herself in the circuit and the Connexion. Hers was without exaggeration a really great life. With a vigorous and informed mind, a sound judgment, natural dignity of bearing, and moral weight, she made the instant impression of nobility of personality and character. With the chastening and ripening years she gave the impression of saintliness. To domestic duties she attended almost to the end. Suddenly she became very tired, and after a few days’ quiet waiting she fell on sleep. A host of friends and old scholars and some of the former ministers of the circuit, attended the funeral service. For many years to come in Derby and the Nottingham districts her rich and full and noble life will be held in remembrance and her name will be as ointment.

Note: There is a discrepancy between the birth date in the obituary and that given in her baptismal record.