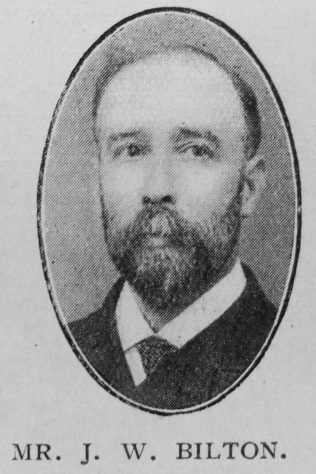 By the death of John William Bilton on April 11th a name long familiar disappears from the circuit plan. Though only fifty-two years of age he had for considerably more than thirty years been a most efficient and acceptable local preacher. For many years he served his church in the offices of circuit steward, trustee and trust treasurer. But the work of preaching was his delight. He had a high sense of the honour and duty and opportunity which the preaching of the gospel imposes, and he laboured to be a workman that needed not to be ashamed.

As husband, father, friend and neighbour he was almost ideal. His radiant personality enabled him to get quickly into touch with people. Coupled with that naturalness was his deep spirituality by which he could pass from mirth to devotion as the April skies pass from sunshine to refreshing shower.

His death was tragically sudden. The interment, at the Ripon Cemetery on Monday, April 15th, was conducted by the writer, a service being held previously in our Allhallowgate Church. A large congregation was present, including representatives of the Free Church Council, of which he had been president; also the Ripon Temperance Society, Liberal Federation, and other institutions. Rev. R.H. Auty and Mr. Hutchinson, of Knaresborough, represented the Leeds District Committee.

John was born in the summer of 1860 at Ripon, Yorkshire, to parents Joseph Bilton, a carter (1861), and Mary Ann Robinson.