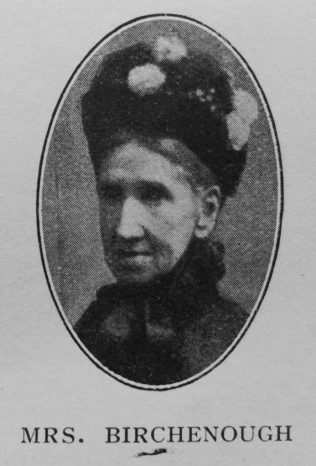 Transcription of obituary published in the Primitive Methodist Magazine by A.A.B.

Eliza, relict of the late Daniel Birchenough, of Congleton, Cheshire, and mother of Rev. Albert A. Birchenough, was born at Stamford, Lincs., August 12th, 1831. She was the descendant of a Methodist parentage, dating back to the days of John Wesley. Her father had the privilege of listening to the ministrations of the eccentric Lorenzo Dow . In her girlhood she frequently heard Hugh Bourne, who reverently placed his hand upon her head and told her to be good and Christ-loving.

For over forty years she was a consistent member of our Church. She was greatly attached to the Society Class Meeting and the public services of God’s House. She was a daily reader of the Scriptures, and was conscientious to a fault. Her home life was most exemplary. As her father had been present at the inaugural Mow Cop Camp Meeting of 1807, and as she attended the Connexional Jubilee Camp Meeting of 1857, so she eagerly anticipated being present at the Mow Cop Centenary Gathering of 1907. Gratefully she mingled with the crowds of worshippers, and eagerly listened to the preachers.

Early in January, 1910, she had a fall which seriously injured her. Her sufferings were most excruciating, but were borne with patient resignation. On March 31st, she peacefully passed into rest. The funeral took place on the following Sabbath, when a most impressive service was conducted by the Rev. Thomas Fletcher. Mr. George W. Stubbs, J.P., gave a beautiful and sympathetic address. Messrs. G. Shaw and T.H. Pearson (Town Missionary), also took part. Her mortal remains were laid to rest in St. Peter’s Cemetery, the committal service being read by the Rev. T. Fletcher. On Sunday evening, April 10th, a deeply impressive “In Memoriam” service was held.

Eliza was born on 12 August 1831 at Stamford, Lincolnshire, to parents John Brittain, an overlooker in a silk factory (1851), and Mary Ann Crowson.

Before her marriage Eliza worked as a dress and bonnet maker (1851).

She married Daniel Birchenough (abt1818-1896), a silk weaver and later a green grocer, in late 1852 at Congleton, Cheshire. Census returns identify four  children.