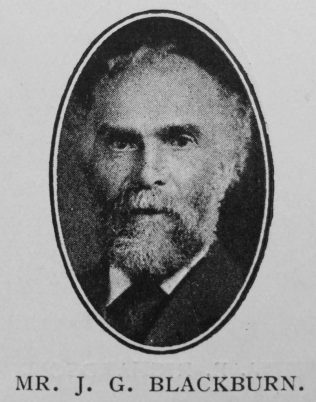 John George Blackburn was born at Whitwell Colliery, December 31st, 1846. For over fifty years he was a member of our Church, and had been present at the Sunday School anniversary at Gilesgate Moor, in the Durham Circuit, for fifty-one years without a break. His chief interest was in the work amongst the “bairns,” and for this he was singularly gifted; he won the affection of the children and yet was a capital disciplinarian. He also served the Church as a class leader and choirmaster. He was for many years the treasurer of the Trust.

One of the greatest pleasures of his life was to be present at the Mow Cop celebrations in May, 1907, and while there he led an impromptu lovefeast and commenced the new organ fund in Mow Cop Chapel.

He was called away with tragic suddenness, while at work in his stable on the evening of November 14th, 1912. His sister, Mrs. Hannah Smith, had died only a week before at the age of eighty-two years, and on the day after his death his daughter-in-law, Mrs. T. B. Blackburn, passed away at the age of twenty-eight years. Such heavy losses evoked much sympathy, and the double funeral was very largely attended, when Rev. H. Fletcher conducted the service in our Church. At the memorial service on January 12th, 1913, Rev. J.W. Clifford, M.A., preached. Mr. Blackburn’s memory will be cherished by his family of two sons and five daughters, and to all his relatives we offer our sincerest sympathy.

John was born on 31 December 1846 at Whitwell Colliery, Co. Durham, to parents Michael Blackburn, a deputy overman (1851), and Hannah Henderson.

He married Mary Fairbank (b abt1857) in the summer of 1906 in the Durham Registration District, Co. Durham.