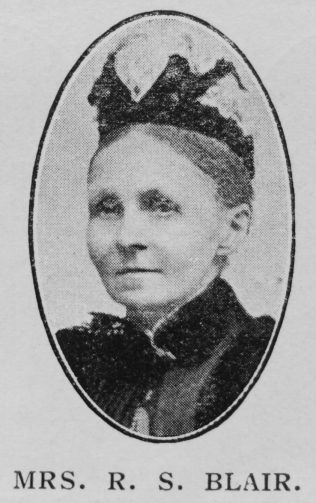 Transcription of obituary published in the Primitive Methodist Magazine by A.T.

Of the many noble women who have been in the ranks of our Church none were more choice in spirit, or self-sacrificing in devotion than Mary, widow of the Rev. R.S. Blair. Born in Yorkshire in 1835, she early lost her parents, but found a home with her grandmother, of whose wise and tender care she always spoke most gratefully. While quite a child she gave herself unreservedly to God. A close and constant study of God’s word cultured both intellect and spirit; a complete selflessness made her sympathetic, quick to understand, and act for others; and much time spent in communion with the Highest gave her dignity and strength which literally overcame much bodily weakness.

She cheerfully seconded all her husband’s efforts, and much that he did was made possible by her zeal and self-sacrifice. Quiet and retiring in disposition, she shrank from the least publicity, though to work early and late, and to sacrifice even necessities to help the cause she loved, was joy to her. Her hospitality was unbounded. Many who have entered her home, tired, dispirited, or sorrowful, have gone away strengthened and helped by her wise sympathy and Christian courage.

Her faith in the Divine Providence was one of her most beautiful characteristics. There had been much in her life that would have caused a smaller soul to doubt and question, but nothing ever weakened, for one moment, her trust in God’s wisdom and love. And hers was not an inactive acquiescence— but a strong triumphant faith, born of a daily and hourly intercourse with God.

Mary was born in 1835 at Market Weighton, Yorkshire.

Before her marriage Mary worked as a domestic cook (1861)