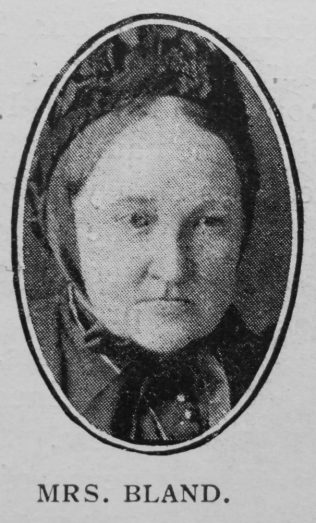 Biggin Society has suffered a serious loss in the death of Mrs. Bland, one of the oldest members of the church, who, after a short illness passed away on Feb. 23rd, in her eighty-seventh year, and was interred at Biggin on Feb. 27th by the Vicar. Many relatives and friends attended the funeral. On Sunday, March 3rd, Rev. T.M. Lakin, Circuit minister, gave an impressive address about her in the place of worship she attended while living. She often said she was converted when she was four years old, and that she knew Hugh Bourne very well, for she had seen and heard him preach at Biggin.

Her father was a P.M. local preacher for many years, and did a noble work. Mrs. Bland was a staunch Primitive Methodist; a friend to the ministers and to the missionary cause, on behalf of which she collected for many years. She was a cheerful, happy Christian, not afraid of death. She often said, “I want to go to my Father in heaven.”

Elizabeth died on 23 February 1912 at Biggin at Biggin-by-Hartington, Derbyshire.