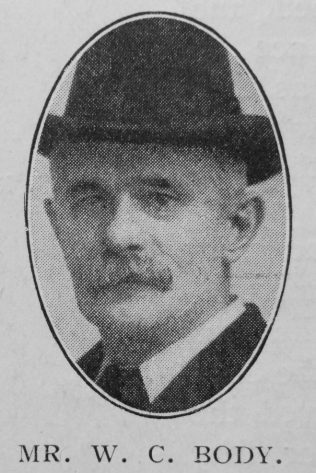 On October 13th, Bro. W. Courtney Body passed into the heavens. He was a man who so lived as to be missed. Though by death a Cornishman, for a great number of years he lived and laboured in London. In all his business transactions he was alert, diligent and gifted. Idleness was alien and hateful to him. These characteristics he carried into all the services of the Church. He was an ardent lover of the house of God, and delighted in all the services of the sanctuary. Most regular at all the services, weekdays and Sundays, he was a devout and appreciative listener. Slovenliness was very distasteful to him, and all that pertained to the services of the Church must be orderly and reverent. He loved preaching and made most careful preparation for his pulpit work.

In his home he manifested genuine affection and was greatly beloved by all who associated with him. He was never quite himself after the chill he caught at one of our local preachers’ meetings. He bore his sufferings cheerfully, and was tenderly nursed by his devoted wife. The esteem he inspired was shown by the large gathering at the funeral and at the grave-side in Paddington Cemetery. The funeral service was conducted by Revs. G. Shapcott, W.J. Price, and R.R. Connell. On the following Sunday Rev. G. Shapcott conducted a memorial service in our Kilburn Church. May God’s consolations be vouchsafed to his widow, who is greatly beloved in our Church.

“Thou are my Pilot wise,
My compass is Thy word;
My soul each storm defies
While I have such a Lord.
I trust Thy faithfulness and power
To save me in the trying hour.”

Courtney was born in 1841 at Liskeard, Cornwall, to parents William Body, a journeyman wheelwright (1851), and Ann Courtney. He was baptised on 26 September 1841 at Wesleyan Methodist Church, Liskeard.

Courtney died on 13 October 1912 in the Marylebone Registration District, London.