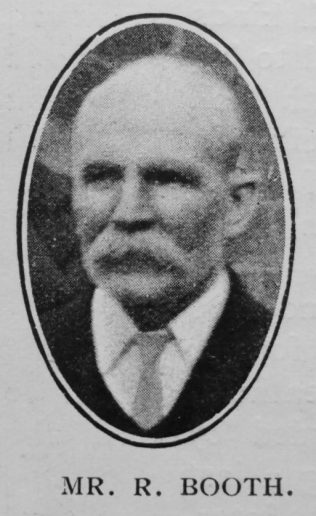 Transcription of obituary published in the Primitive Methodist Magazine by F. Winterburn

Mr. Richard Booth was born at Long Eaton on June 3rd, 1860, and all his life was closely connected with our Bourne Church. His parents were consistent members of society, and their son was sent at an early age to the Sunday School. He only ceased to be a scholar to become a teacher, and about fourteen years ago was appointed Assistant Superintendent. At the time of his death, on February 28th, 1912, he was School Superintendent, Trustee, and Society Steward. In these offices and in other capacities he rendered incalculable service to our Church.

In every department of its work he was deeply interested. Its prosperity was his joy. His service was untiring, his generosity without stint. There is no single phase of the life of the Church in which his cheery  optimism, his wise counsel, and his unfailing kindness will not be sadly missed. He was a friend to every good cause, and took an intelligent interest in all that concerned the progress and well-being of the town in which he lived.

For over twenty years he was a member of the local Band of Hope Union. From the formation of the Free Church Council he readily took his share of the work. His life of useful and generous service, and his unassuming goodness and intrinsic worth of character won for him a deep and widespread affection and esteem. The great loss caused to our Church and to the town in general, by his removal from us was shown by the many beautiful wreaths, resolutions of sympathy and letters of condolence to Mrs. Booth and her family.

He married Hannah Maria Hall (1862-1934) in the summer of 1882  at Long Eaton, Derbyshire. Census returns identify nine of ten children.