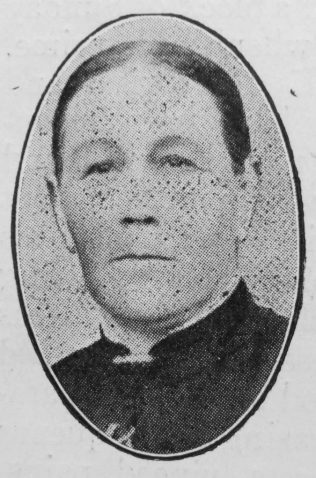 Transcription of obituary published in the Primitive Methodist Magazine by C.H. Lightfoot

Rebecca Bovill, the beloved wife of Mr. John Bovill, of Hayton, near Retford, departed this life on April 2nd, 1907, after being for forty-eight years a consistent member of our Church. She was converted in the year 1859 in our Clarborough Chapel. She was then living with her father and mother, but was not helped by Christian home influence. During a service conducted by the Rev. William White the Word entered and took possession of her heart and she decided to surrender herself to Christ. This she did publicly and her subsequent life was “such as became the gospel of Christ.”

It was through her influence that her brother, the late Councillor Peatfield, began to attend the services of our Church. She bought him a book which it is believed helped to form his Christian character and to qualify him for the yeoman service for Christ which he afterwards rendered. Forty-seven years ago she became united in marriage to Mr. John Bovill, and during the whole of their married life it has been joy to them to entertain the preachers in their home. Mrs. Bovill was ever intensely interested in our missionary cause and in the Sunday School and whenever possible supported by her presence the public ordinances of God’s house. She had the habit of giving and must have secured the love that God has for the cheerful giver. Her funeral in Hayton Churchyard was attended by a large number of friends, and an impressive memorial service was held on the following Sunday evening conducted by the Rev. W. Robinson.

Rebecca was born abt1842 at  Clarborough, Nottinghamshire, to parents John Peatfield, a fruit dealer (1871), and Mary Ann Clark