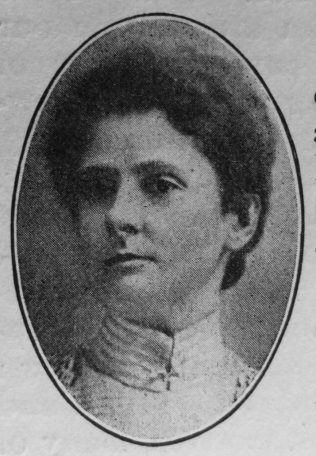 Mrs. Bowran was the eldest daughter of Mrs. and the late, Mr. T.J. Robson, of Gateshead. She was married to Rev. J.G. Bowran, September, 1893, in the Prince Consort Road Church, in which they had both been reared from childhood. Together they have served since then in the ministry of our church, three years at Cockermouth, four years at Brandon, six years at Middlesbrough, and lastly at Hexham, where they had been exactly one year when she died on July 6th, 1907.

Until a little over two years ago Mrs. Bowran was as healthy and vigorous in body as in mind and spirit. Life to her was full of happiness and hope. With a mother’s joy and pride she was giving of her best in the training of her four children.

Suddenly the trouble leapt into their home. Most unexpectedly the lung disease in violent form attacked her. The doctor ordered her immediate removal from her home in Middlesbrough, and she was never able to return to it. The best of medical skill was secured for her, and a large part of that year was spent at the Liverpool Sanatorium in Cheshire. Then it was hoped that her removal to her new home at Hexham would greatly assist toward her recovery.

The Hexham friends acted nobly in taking a house most favourable for the treatment, of her case, and for some time there were better hopes of her ultimate recovery. These hopes were greatly encouraged by her own cheerful spirit and brave determination to get better.

This, however, was not to be. There was a renewed outbreak of the disease. The end came suddenly but very sweetly and peacefully. Often had she prayed in vain for sleep, but God gave to His beloved a beautiful sleep on that Saturday night, and in it she passed away without pain or struggle.

Mrs. Bowran was a rare, noble, lovable character. The writer and his wife have been privileged to be most intimately associated with Mr. and Mrs. Bowran both in private life and church work, and so have had many opportunities for knowing and appreciating her worth and work. It was our joy to succeed them in their first home and circuit at Cockermouth, where we had abounding evidence of the way in which she had become esteemed and beloved during her first term as a minister’s wife.

Her influence is also very marked in Middlesbrough. That circuit has already placed a tablet to her memory in the Linthorpe Road Church.

We could say much concerning her appreciative regard for ministerial friends, colleagues, and their wives. She added charm to these friendships. Then she had many other valuable qualities for one in her position. Her gentleness made her great, she was refined and cultured, a true lover of literature, but above all she was a fine Christian, Her interests in all that pertained to the ministerial life were always widening and growing.

Her judgments of people were wonderfully keen and true. We can easily understand how she came to give the title to her husband’s first book about our Durham Methodist miners, by declaring that we must judge these men “On God’s lines.”

“God moves in a mysterious way.” We can but pray and wait until God becomes “His own interpreter.” Sadly, reverently, and lovingly her mortal remains were laid to rest in the beautiful Hexham Cemetery on Wednesday, July 10th.

Before the remains were lifted from the home, Rev. J. Walton, of Motherwell, led us in prayer. A service was held in the United Methodist Free Church (as most conveniently near the house), and Rev. R. Hind, who had known her from childhood, gave a tender an beautiful address.

The other ministers who took part in the service were Revs. J.G. Soulsby, F. Winterburn, C. Humble and H. Pratt, while many other ministers were in attendance. The service at the graveside was taken by Revs. D. McKinley and James Young.

We turned from the grave with sad, heavy hearts. Our heartfelt, prayerful sympathies were with her mother, sisters, brothers, and her lonely husband and children. Our friend’s loss is an unspeakably sad one, but he has borne it and will continue to do so with brave Christian fortitude. There are many who remember him and his dear children at the throne of grace. We know he can accept Whittier’s words and call:

“She is with thee; in thy path of trial
She walketh yet,
Still with the baptism of thy self-denial,
Her locks are wet.
Up then, my brother! Lo, the fields of harvest
Lie awhile in view :
She lives and loves thee, and the God thou servest,
To both is true.”