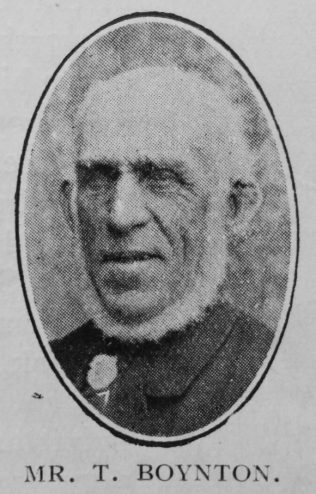 By the passing of Thomas Boynton the society of Wetwang and the Driffield Circuit have lost one of their most original officials. He always stood out from his fellows. Being possessed of a pushful personality, in his younger days he manifested this trait on pugilistic lines and thus made his mark on men. After his conversion in the mid ’sixties of the last century he was destined to influence men as profoundly in spiritual things. He carried his pugnacity in his preaching and was not wont to serve the milk of the word, but dealt in the strong meat of doctrine. He was a great believer in saving men by fear. His fame spread far and wide and he was in demand for special events of varied character.

He took a large share in camp meetings, and being a railway servant, he was often required by his fellows to take part in the religious work done by them up and down the country.

He was possessed of a tenacious memory, and had a quick ear for words, and having something of the orator’s temperament, he has many times held large companies in thrall by his marvellous knowledge of spiritual things and his apt use of striking and poetic language. Always lavish in the expenditure of energy, nature took her toll as years advanced and the last two years were full of suffering. The end came with startling suddenness and he died sitting in his chair a few hours before the Sabbath dawned.

He often said, when nearing the end, “If people ask how Boynton fared at last, tell them he knew no fear, but died saved by the blood of the Lamb.” And we doubt not that now he is with those. whose robes are thus made white and who are before the throne. He was a good man and a brave Christian.

Thomas was born in 1845 at Pocklington, Yorkshire, to parents Francis Boynton, who worked the land, and Elizabeth Abbott. He was baptised on 26 December 1847 at Pocklington.

Thomas died in the spring of 1913 at Wetting, Yorkshire.

Note: Although most census returns and baptism record suggest birth at Pocklington, his birth record and 1851 census return suggest Beverley as his place of birth.