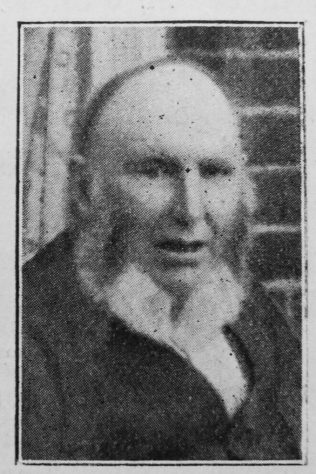 Transcription of Obituary in the Primitive Methodist Magazine by T.W.H.

Mr. William Brazier was born at Wavendon, on Jan. 28th, 1849. His parents were devoted Christians, and Mr. Brazier’s later zeal was due, in a great measure, to the seeds sown, in his early life, by the precept and example of his father and mother. He was converted at the age of fifteen, in the Primitive Methodist Chapel, and then began forty-two years of zealous and unbroken service for his Master.

The Sunday School was his chosen sphere, and eventually he was appointed to the superintendency. Under his care the number of scholars increased quickly, and in his latter days he delighted to speak of local preachers, teachers, church officials, &c., some dead, others scattered far and wide, who aforetime had been scholars under his supervision.

When eighteen years of age he passed the probationary preliminaries successfully, and was received on full plan. He was in great demand for special services, camp meetings &c., and he never scrupled to work diligently. Twelve preaching appointments in a quarter, no neglected duties, under all atmospheric conditions, in a wide country circuit, need no words of comment.

Six years ago he was stricken down by affliction, and up to his death, on February 16th of this year, his life was that of a martyr, and yet, what heroism of spirit, what a dominant faith in the Unseen, was his! His geniality and cheerfulness were maintained up to the last. A month before his death he was taken to the polling booth in a carriage to register his “last vote” for the cause of the people, and he asked the driver to take him to see the chapel once more. The end came suddenly, but his last moments were full of light and peace. He died with his hand in that of his wife, after she had sung to him, “Jerusalem, my happy home.”

He was laid to rest in Wavendon Churchyard, the Rev. C.H. Spivey, assisted by the vicar, conducting the funeral service. His body was borne by local preachers, and the crowd of people in attendance testified to his sterling character. The Rev. T.W. Hancox, assisted by Brothers T. Petts and J.T. Swannell, conducted the memorial service.

He has left behind him a wife, son, and daughter, and he had the joy of knowing that his son-was entering into the service of the Church. It is such lives as his that teach us the great lessons of faith, endurance, and resignation; and as a result of our association with him we feel more and more the reality of the eternal verities of the kingdom of our Father.

William was baptised on 16 September 1849 at Wavendon, Buckinghamshire. His parents were James, who worked the land, and Charlotte.

William spent his working life as a farm labourer.