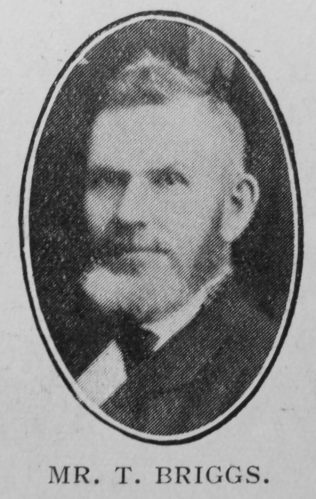 Transcription of obituary published in the Primitive Methodist Magazine by R.W.

Thomas Briggs, of Browney Colliery, was born at West Rainton, Co. Durham, April 16th, 1839. He started work in the pit when seven years of age. When twenty-eight years old he was converted. He took a deep interest in revival services, and would walk miles to attend them.

He married Miss M. Coulson, of High Pittington, who proved a true helpmeet to him. The Bible was the special book in his home; he believed in the family altar; he attended all the services of his Church. Visitation received a large share of his time. He was a generous supporter of his Church, and four chapels at least owe their existence to his advocacy and help.

He was seen at his best in the Class Meeting and Sunday School. From classes he conducted there went forth into different parts of the country Sunday School teachers, class leaders, local preachers, and three ministers.