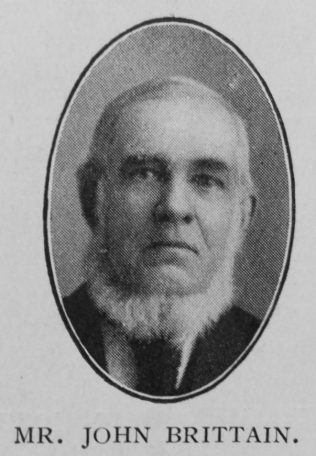 W. M. Patterson, in his history of Northern Primitive Methodism, referring to the worthies who began our church at Staithes, says: “John Brittain is believed to be the only one now living of that goodly band.” And now John Brittain has departed; he entered into rest on March 24th, 1913, in his seventy-ninth year. He had a record of service of which any man might be proud. The Board of Trade presented him with a certificate and silver medal for forty years’ service with the “Rocket Life Saving Brigade.” He held gold and silver medals and a roll of honour for fifty years’ service in the Sunday School. For many years he was society steward and school superintendent.

A man of strong personality, there was a quaint simplicity and a high sense of honour in all his official dealings. He loved his Church and was a liberal supporter of its interests. A service was held in the Staithes Church, conducted by the Revs. Tyler Tyers, J. Glasby, C.G. Tetley, and E. Campbell.