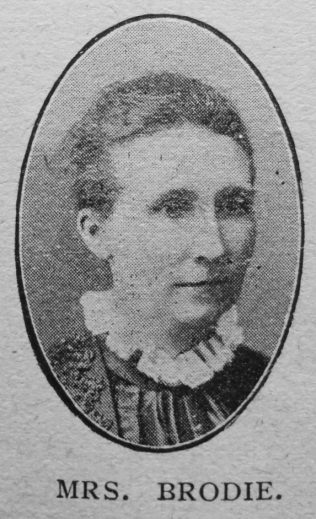 Mrs. Brodie, widow of the late Rev. Thomas Brodie, passed to her rest on October 12th, 1918. She was the daughter of the Rev. E. Rust, and was born at Bedford in 1845. After her marriage to Mr. Brodie, in 1870, they travelled mostly northern circuits – Brough, Jarrow, Stanley, Hartlepool, and Newcastle – and, finely gifted, she was everywhere of valuable help to her husband. When, after a breakdown in health and two years’ illness, Mr. Brodie passed away in 1886, she was left with five children, the eldest being only fifteen years. But she bravely faced the difficult task, and by sheer ability and hard work, she succeeded splendidly, and her children “rise up and call her blessed.” In spite of the uphill fight she was called upon to make, her interest in the Church never wavered, and her home at Blackhill, where she had settled down, was the preachers’ home.

She removed to Redcar in 1904, and for the last fourteen years has been busy here in every good work, especially in the efforts to raise money to build a new church, one of the outstanding features of the grand bazaar being Mrs. Brodie’s stall. As might be expected from one who was a daughter of the manse, as well as the wife of a minister, she was always a loyal and devoted Primitive Methodist, interested in all Connexional institutions, and a real friend of the ministry.

The call home came quite unexpectedly while she was away on a visit to a daughter, and the interment took place at Blackhill, where the remains were laid beside those of her husband. We shall meet again in the morning. It is a joy to think of the re-union she has found above.

Emma was born in late 1845 at Bedford, Bedfordshire, to parents Edward Rust, a PM minister, and Emma Fowlser.

She married Thomas Brodie (1841-1886) in the summer of 1870 in the East Ward Registration District, Westmorland. Census returns identify five of six children.

After the death of Thomas, Emma earned a living as a draper.