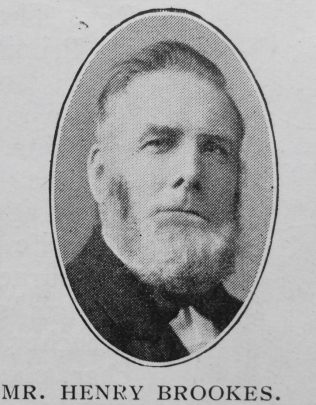 Henry Brookes was born in the Cheshire village of Bunbury in 1846. Wedgwood and other pioneers, seeking to establish a cause in the locality, made their home in the Radmore Green farmhouse, where he served. Removing to Crewe, he continued an employee of the L.&N.W. Railway Co. until near the close, of life.

An advanced Radical, Henry Brooks was reliable and enthusiastic in every good cause. At twenty years of age he was converted at Hashington (Haslington). Joining Choir and School, he was twenty years superintendent at Henry Street School, seeing it grow from 100 to 400 scholars, and receiving, in 1906, the Diploma of Honour for twenty-six years’ continuous work.

Chapel steward twenty-six years, and trustee from the beginning, he battled hard for the young cause, and had the joy of seeing established a vigorous church.

Henry Brookes was a loyal Primitive Methodist: proud of our history, loving our people, and devoted to the Church’s service. In the home his qualities were at their best. His Christly life and unbending integrity made him a precious possession in the locality. His last illness, long and distressing, ended September 21st, 1910, in perfect peace.

Henry was born in 1846 at Bunbury, Cheshire, to parents Richard Brookes, who worked the land, and Mary Harding. He was baptised on 4 January 1846 at Bunbury.