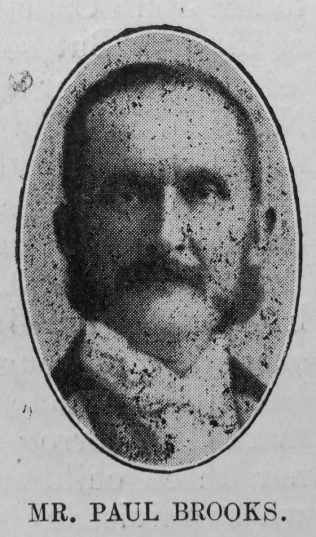 Transcription of Obituary published in the Primitive Methodist Magazine by W. Lawrence

Our church at Biddulph Moor in the Bradley Green Circuit has recently sustained a series of heavy losses by the death of trustees who were more than trustees in name. Paul Brooks was called to the higher service on November 6th, 1908. He was a native of Biddulph Moor, and more or less associated with our Church and Sunday School all his days. Though blessed with a godly mother he did not surrender to Christ until he was twenty seven years of age. He was led to decide for Christ and His Church by the death of his only child. From then until his death he has been a devoted member and an earnest worker in the church and Sabbath School. The Sunday School was pre-eminently his sphere of work.

Mr. S. Bailey, the superintendent, says: “He loved his class and evoked a responsive love in his scholars.”

Diligent and honourable in business his influence in the church was considerable. He supported the cause with liberality and cheerfulness. His last illness was painful and depressing in its character, but it was borne with great patience and resignation. Converse with him was an inspiring means of grace to many. When the power of speech failed him he lifted his hand in token of triumph over the last enemy. His mortal remains were laid to rest in the Biddulph Moor Churchyard on November 10th. A large number of friends gathered to pay their last tribute of respect to one whom they honoured and loved. Amongst these was the vicar of the parish, who assisted our minister in the service both in our chapel and at the graveside.

His death was improved on Sunday, January 3rd, by Mr. W. Stoddard. The service was solemn, impressive, and helpful in its character. We mourn our loss but we rejoice in his gain. We sympathise with his widow in her loneliness and pray that she may be divinely comforted.

“Of all the thoughts of God that are
Borne inward unto souls afar,
Along the psalmist s music deep,
Now tell me if there any is,
For gift or grace, surpassing this—
‘He giveth His beloved sleep’?”

Paul was born abt1856 at Horton, nr Biddulph Moor, Staffordshire, to parents Samuel, a stone mason, and Sarah. He was baptised on 13 February 1856 at St Michael, Horton.

He married Edna Biddulph (abt1861-1936) on 27 May 1878 at Christ Church, Biddulph Moor, Staffordshire. Census returns identify one child.