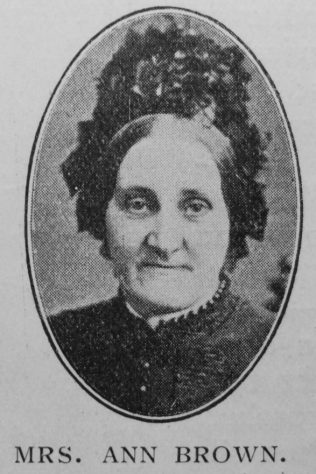 Transcription of obituary published in the Primitive Methodist Magazine by J. Burkitt

In the death of Mrs. Ann Brown, which occurred at Gainsboro’, on the 7th of November last, there has passed away an interesting and attractive personality. She had reached the ripe age of seventy-seven years, having been born at Pigburn, near Doncaster, in 1833. Her parents were of the village labouring class, and her early religious associations were with the Established Church.

When about eighteen years of age she joined the Primitive Methodists, and received her first class ticket at the hands of the Rev. Henry Woodcock. The ticket bore the name Ann Sowden.

The same quarter a young man at Tickhill also received his first class ticket—William Brown—and a little later the two met for the first time in a public service at Tickhill. Their marriage had the smile of Heaven. For many years they lived happily  together. Their memberships with the Primitive Methodist Church was only broken by death. About six years ago, William Brown exchanged mortality for immortality, and after a few years waiting, the partner of his earthly life has joined him in the perfect life beyond. Their children rise up and called them blessed. Their grand-children are with us; Primitive Methodists of the third generation, and among the best workers in our Church.

Mrs. Brown was a great missionary enthusiast. A missionary collector nearly all her life, she carried one box until with its repeated loads the bottom fell out. Our missionary revenue was greatly enriched by her labours. Of a singularly sweet and lovable disposition, she made many friends, and her amiability was equalled by her deep, sincere, and unobtrusive piety. Now she is at home with God we cherish her memory, and thank the Great Giver for her beautiful life. Removing from Tickhill to Gainsboro’ while still young, the greater part of her life has been associated with Gainsboro’ Primitive Methodism.