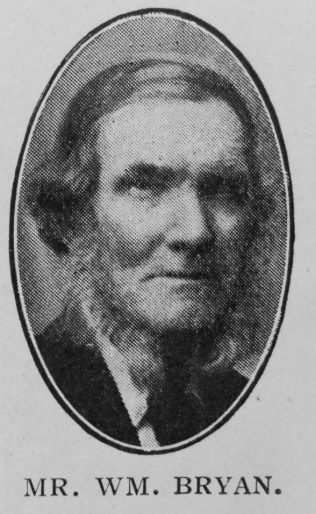 At the ripe age of eighty-seven years Mr. William Bryan peacefully passed away June 21st, 1911. He was born at Ness in the Parish of Neston, near Chester, on the 5th of January, 1824. In his early youth he gave himself to God and Primitive Methodism, and through all the years—seventy and more—he has had an honourable place in the Church he loved passionately and to which he gave ungrudging and unstinted service. Everyone was impressed with the sincerity and depth of his devotion. He was singularly generous for his means.

From his conversion to his marriage in 1848 he resided and worshipped at Ness. Then he removed to New Chapel in Staffordshire. There he found our people without a place in which to worship and straightway opened his house for the services and his home for God’s messengers. For some years he resided at Sanghall, (Saughall) the home of his wife, then at Sandycroft, in the Buckley Circuit, and in 1867 went to Buckley itself, interesting himself in the building of chapels and sharing the responsibility of trusteeship.

In January, 1878, his employment brought him to Crawford village, where his influence upon our Church life has perhaps been most fully realised. Though preferring the quiet places, he has at the call of duty acted as Society Steward and Class Leader with efficiency and success. A serious accident affecting his sight some twenty years ago compelled retirement, but his presence and influence have been an abiding benediction. His closing days were fittingly peaceful and happy. As fruit ripens and just falls off, so he fulfilled his day and died with mental faculties unimpaired and spiritual vision bright. His dust sleeps in the graveyard of the beautiful village of Sanghall. (Saughall) His spirit is with God.