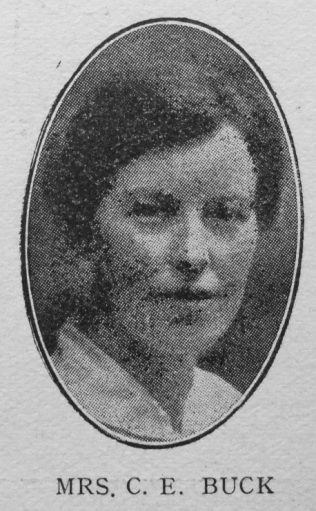 Ethel Buck who, on March 27th, 1929, joined the triumphant host of the redeemed, was born at Baldock, September 21st, 1880. Her father was the late William Hankin, Circuit Steward of the old Baldock Circuit, whilst her mother was a daughter of the late Rev. John Rackham, famed for his saintliness, industry, and success in circuit work. Ethel removed with her parents and family to Leigh-on-Sea more than thirty years ago. In 1916 she was married to Rev. Chas E. Buck and immediately she threw herself heart and soul into the work of the Church. At Chelmsford, Luton, and Hounslow the fragrance of her ministry is still precious. Their only child, Mary Rowena, happily survives her mother, and is a great comfort to her father.

It was during their Hounslow ministry that Mrs. Buck’s health began perceptibly to fail, and before the completion of their eighth year on the circuit she quietly passed away, to the great sorrow of her husband and loved ones.

Ethel Buck was a gracious personality possessing fine qualities of soul. With her face ever toward the sun rising and with her beautiful and unselfish disposition she radiated a gracious atmosphere in all circles wherein she moved.

In Sunday School work, and in Preparation for bazaars, she gave all the help her constitution would permit. At last “God’s finger touched her” and she quietly but triumphantly passed into His more immediate presence and fellowship. The funeral service at Hounslow Church was numerously attended, many ministers being present. Her remains were laid to rest in them Leigh-on-Sea cemetery, close by those of her honoured parents. For those she has left we cherish the deepest sympathy. They are a united family and the sorrow of one is the sorrow of all.

Ethel was born on 21 September 1880 at Baldock, Hertfordshire, to parents William, a baker, and Sarah Elizabeth.

Before her marriage, she worked as a shop assistant, fancy goods and stationary (1911)

She married Charles Edward Buck (1878-1944), a PM minister, in the summer of 1916 in the Rochford Registration District, Essex. Records identify one daughter.