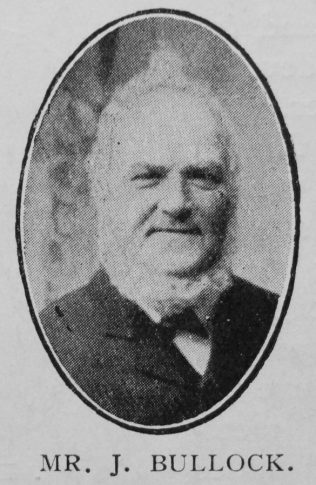 Transcription of obituary published in the Primitive Methodist Magazine by A.R.W.

If to live quietly and to serve faithfully is to win the Master’s “Well done,” then certainly John Bullock of Wetwang in the Driffield Circuit has already heard that benediction. No man ever proved more fully the truthfulness of the word of prophecy, “In quietness and confidence shall be your strength” than did he.

Reserved, meditative, he pondered deeply in his heart the great things of life. Puritanic, in the best sense, he lived a clean, strong, virile life. A Primitive Methodist by early training, and a preacher by divine call, he walked long journeys to declare the message of grace. This he continued until a few weeks before his decease. By the grace of God he lived; and by that same grace he has fallen on sleep in Jesus, and leaves behind him the influence of a long, strong, and useful life.

John was born in late 1839 at Wetwang, Yorkshire, to parents George Bullock, a shoemaker, and Hannah Wilson. He was baptised on 13 October 1839 at Wetwang.