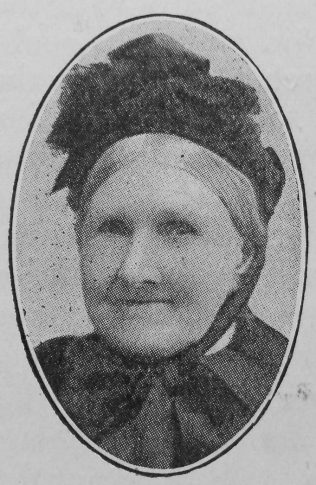 Rehoboth Central Mission, Leeds, has just lost one of its most constant and valuable workers by the death of Mrs. Bunton. Forty-one years ago she came to Leeds from the village of Fransome with her husband and family. Thirty-four years ago her beloved partner died leaving her to struggle with a large family. In recent years, since home ties have been less exacting, she has attended practically every meeting held at the old sanctuary she loved. In the stormiest weather, when many younger people kept indoors, she was always in her place, and the minister was sure of her welcoming smile as he opened the service on a Sunday morning. She was a most faithful class leader and visited her members constantly. At the mothers’ meeting, too, she did splendid service.

She was the very embodiment of charity and was never heard to say a hard word about another. If all our members supported their church as well as she in proportion to their means, Primitive Methodism would never know a financial difficulty. No family ever had a kinder mother. She has moved among her married children and their families as an angel of mercy, ministering to them in affliction and helping them in their troubles, At the ripe age of seventy-seven years she passed away.

On the Sunday evening she left the prayer meeting early, and the preacher (the Rev. E. Dalton, an old friend) grasped her hand at the communion rail, expressing the hope that she had yet some years of service for the Master before her, but on the Tuesday morning she entered into rest, leaving many sad hearts in the homes and the church where she was so dearly loved. But sorrow is tempered with the thought that she has gone to a well-earned reward, and to the presence of the Saviour she loved and served so well.

Susannah was born abt1841 at Saham Toney, Norfolk, to father Thomas, who worked the land. She married William Bunton (1828-1874) in early 1850 in the Mitford Registration District, Norfolk. William worked as a labourer. Census returns and birth records identify 13 children.